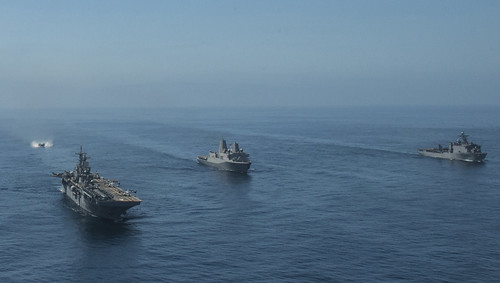 SAN DIEGO - More than 4,500 Sailors and Marines from the Boxer Amphibious Ready Group (ARG) and 13th Marine Expeditionary Unit (MEU) are scheduled to depart San Diego for a deployment to the U.S. 3rd, 5th and 7th Fleet areas of operation, Feb. 12.

Before being certified to deploy, the individual ships and units of the ARG/MEU team were required to complete and pass four integrated and advanced training exercises that were designed to test and evaluate their capabilities during battle-force scenarios and real-world situations they may face while deployed.

"The Boxer ARG, 13th MEU team has truly excelled in their preparation for deployment," said Capt. Keith Moore, commander, Amphibious Squadron 1. "The Sailors and Marines of the ARG/MEU team are well trained and ready to deploy in support of all missions."

"I echo the Commodore's statements," stated Col. Anthony Henderson, commanding officer, 13th MEU. " Whether a humanitarian assistance mission or combat operations, we are ready. An equally critical contribution to our nation's security is the presence and interaction of America's sons and daughters of this Navy-Marine Corps team around the world as representatives of freedom, liberty, and hope."

The mission of the Boxer ARG is to help provide deterrence, promote peace and security, preserve freedom of the seas and provide humanitarian assistance/disaster response as well as support the Navy's Maritime Strategy when forward deployed.

The mission of the 13th MEU is to provide a forward deployed, flexible sea-based Marine Air Ground Task Force capable of conducting amphibious operations, crisis response and limited contingency operations, including enabling the introduction of follow on forces and designated special operations in order to support the theater requirements of geographic combatant commanders.