USS Higgins to Return from Deployment 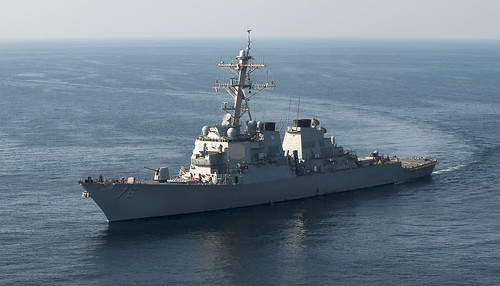 While deployed to the U.S. 5th and 7th Fleets, the ship and crew of more than 300 Sailors, assigned to Destroyer Squadron (DESRON) 23, conducted presence and maritime security operations in support of Carrier Strike Group 8 and multiple combined task forces.

During the deployment, USS Higgins conducted numerous visit, board, search, and seizure (VBSS) missions, participated in several joint and coalition exercises, and also responded to high priority missions during the first absence of an aircraft carrier from U.S. 5th Fleet since 2007.

While on station in the Arabian Gulf, USS Higgins also rescued four Saudi Arabian fishermen after their boat had caught fire. The crew was able to retrieve the four men from the water and return them safely to local authorities, greatly contributing to relations between the United States Navy and the local populace.

"I could not be more pleased with the hard work and dedication from this crew," said Cmdr. Allen P. Johnson, commanding officer of Higgins. "I know we can all reflect on this time we have spent underway and be proud of the contributions we have all made to our nation and national security."

Higgins is a multi-mission ship with anti-air warfare, anti-submarine warfare and anti-surface warfare surface combatants capabilities; designed to operate independently or with an associated strike group.

The ship is homeported in San Diego and is part of Naval Surface Forces and U.S. 3rd Fleet.