From Naval Base Guam Public Affairs 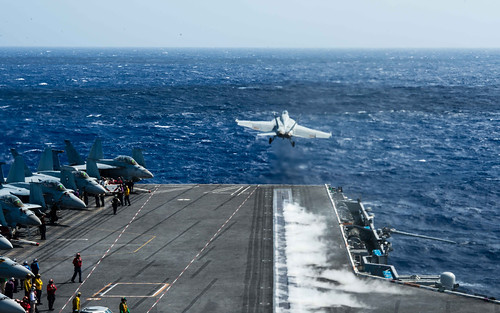 Pulling into Guam provides opportunities for Sailors to take advantage of what Guam has to offer and be able to participate in community service projects and activities in the next few days. The projects are an important part of building and strengthening relationships with allies and partners.

Approximately 7,000 Sailors make up the strike group, which is on a regularly scheduled Western Pacific deployment. The JCSSG crossed the International Date Line into the U.S. 7th Fleet area of operations, Feb. 4, and continues its patrol in 7th Fleet supporting security and stability in the Indo-Asia-Pacific.

“The Sailors of this strike group are ready, willing and able to go wherever is necessary to protect American interests,” said Rear Adm. Ron Boxall, commander, JCSSG. “We will continue the great tradition of projecting power and enhancing U.S. partner relationships around the world.”

JCSSG is the centerpiece of the Great Green Fleet, a year-long initiative highlighting the Navy’s efforts to transform its energy use to increase operational capability. The strike group is using energy efficiency measures, to include technologies and operational procedures, and alternative fuel in the course of its normal operations.

As the strike group flag ship, Stennis hosts an embarked air wing and deploys with as many as six ships. The ship is named after Senator Stennis, a 41-year statesman from Mississippi.