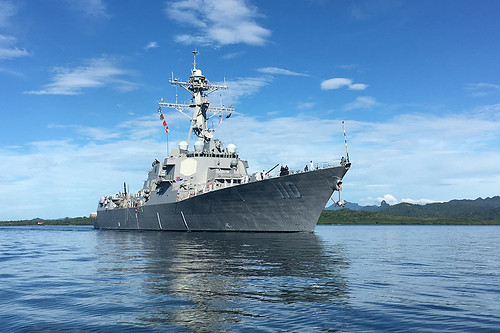 Lawrence's port call in Suva is the first time a U.S. warship has visited Fiji in almost 10 years. Ship visits like these provide excellent opportunities for the United States and Pacific Island Nations to strengthen theater security cooperation and help to ensure a safer and more prosperous future for the region.

While in port Suva, the crew of more than 300 Sailors actively integrated with the local community. Sailors visited Samabula Senior Citizens Home, painted one of the wards in Colonial War Memorial hospital and met with students from Veiuto Primary School and Cathedral High School.

"It was a truly rewarding experience to give back to the Suva community," said Personnel Specialist 2nd Class Brian Swarthout who provided landscaping services to the elderly at Samabula. "Seeing the sheer joy on their faces is unforgettable, and we will cherish the friendships made during our short stay."

The port visit provided opportunities to foster U.S.-Fiji military relations through a series of bilateral engagements. During the port visit Fiji military officials organized a roundtable to discuss the U.S. Navy and U.S. Coast Guard search and rescue mission. "The meeting provided an outstanding exchange with Fiji, one of our regional SAR mission partners," said U.S. Coast Guard Lt. Matthew Guanci. "It has surely laid the foundation for future engagements with the new Fiji Rescue Coordination Center."

Lawrence also engaged with the next generation of Fiji military leadership. Commanding Officer Cmdr. Walter C. Mainor held a leadership symposium with cadets from the Royal Fijian Maritime Academy. The meeting was followed by a soccer match between members of the ship's crew and the academy.

Following the visit in Suva, Lawrence will commence maritime law enforcement operations in support of the Oceania Maritime Security Initiative (OMSI). OMSI is a secretary of defense program which leverages Department of Defense assets transiting the region to increase the Coast Guard's maritime domain awareness.

A law enforcement detachment from U.S. Coast Guard Tactical Law Enforcement Team South based out of Miami will work with Lawrence to conduct maritime law enforcement operations in support of U.S. and Pacific Island Nations fisheries laws and to suppress illicit activities. Upon completion of OMSI, the ship will continue operations in the Indo-Asia-Pacific region.

Commissioned June 4, 2011, Lawrence is named after Vice Adm. William P. Lawrence, a naval aviator, former Vietnam prisoner of war and former commander of U.S. 3rd Fleet. Lawrence is a recipient of the Silver Star and the Distinguished Service Medal, the nation's third highest military award, for his inspirational leadership while in captivity. Commanded by Cmdr. Walter C. Mainor, the ship is assigned to the John C. Stennis Carrier Strike Group and is operating as part of the Great Green Fleet on a regularly scheduled Western Pacific Deployment.