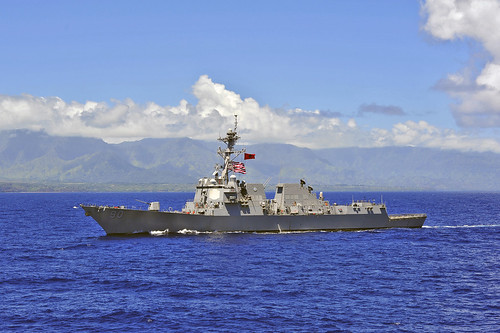 In this file photo, USS Chafee (DDG 90) maneuvers along the coast of Kauai during a certification exercise. (U.S. Navy/MC2 Jon Dasbach)

In a message of congratulations, Vice Adm. P. H. Cullom, Deputy Chief of Naval Operations for Fleet Readiness and Logistics, said, "I would like to extend my thanks and congratulations to all of the fiscal year 2015 Environmental Award winners. Your efforts not only embody the environmental stewardship ethic, but also aid in fulfilling the Navy's national security mission. I applaud all of the nominees for their tireless commitment to preserving resources and bettering the environment. Bravo Zulu!"

Working with federal and state agencies, schools, conservation organizations, the public and host community, PMRF implemented numerous groundbreaking initiatives toward conservation, environmental protection and protection of endangered species. For example, under the Laysan Albatross Conservation program, PMRF transferred eggs to Campbell National Wildlife refuge on Oahu to provide new shelter for the birds and reduce the risk of aircraft strikes. The "Dark Sky" initiative, which directed the turning off of all non-essential exterior lighting on PMRF during the Newell Shearwater, Hawaiian and Band-Rumped Storm Petrel migration season, reduced "fallout" by these endangered birds that are naturally attracted to light.

"The Ohana (family) here at Pacific Missile Range Facility is simply awesome and they truly deserve all the recognition. I couldn't be more proud of the daily efforts put forth by each and every member of our team," said Capt. Bruce Hay, Commanding Officer of PMRF.

In the past year USS Chafee transited more than 37,000 miles on a seven-month deployment to the 3rd, 4th, and 7th Fleet Areas of Responsibility while participating in the Oceania Maritime Security Initiative, Talisman Sabre 15, UNITAS PAC 15, and UNITAS LANT 15. USS Chafee conducted all operations with no impact to marine mammals and with safe and clean refueling operations.

Environmental protection and energy conservation were at the forefront of operations, according to Cmdr. Shea Thompson, commanding officer of USS Chafee.

"We're all thrilled to have been selected for this award. We strive for efficiency in all aspects of our war fighting operations and to be good stewards of our environment," said Thompson.

All CNO winners will go on to the Secretary of the Navy level of competition.