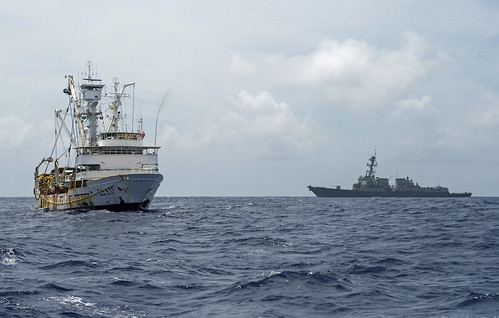 USS William P. Lawrence (DDG 110) sits in the vicnicty of a fishing vessel while support a boarding and inspection as part of the Oceania Maritime Security Initiative. (U.S. Navy/MC3 Emiline L. M. Senn)

The boarding teams inspected documentation and fishing holds for illegal activity and conservation management compliance. PIN ship riders provide assistance as the local authority within their respective Exclusive Economic Zones (EEZ), an area defined by international law allowing each nation exclusive rights to the exploration and use or marine resources. Oceania contains 43 percent of the United States’ EEZs.

Boarding teams did not find any violations and reported that the fishermen were cordial and intrigued by U.S. presence in the region.

“They were all very receptive and curious about our mission,” said Navy Ensign Daniel Cook. “OMSI is still a relatively new program, but we were able to explain our presence to them with assistance from our organic translators and the PIN ship rider...it was really rewarding to see we are making a difference and protecting their livelihoods, both in an economic and environmental capacity.”

With crew sizes ranging from 14 to 30, the fishing vessels are capable of hauling up to 200 tons of fish. According to Cook, one of the vessels reported her last delivery exceeded 167 tons. The crewmembers of varying East Asian heritage—Chinese, Fijian, Filipino, Indonesian, North Korean, and Taiwanese—will spend an entire year at sea hauling their loads over thousands of miles from the PIN region to mainland Asia.

“Fishing is a $7 billion industry in the region, and an estimated $4 billion is illegal, unlawful, or unregulated,” explained U.S. Coast Guard Lt. Matthew Guanci. “U.S. partnership with Australia, New Zealand, France, and PIN deters illegal fishing and promotes economic and environmental stability in the region—this is the foundation for OMSI.”

Upon completion of OMSI, the ship will continue operations in the Indo-Asia-Pacific region.

Commissioned June 4, 2011, Lawrence is named after Vice Adm. William P. Lawrence, a naval aviator, former Vietnam prisoner of war, and former commander of U.S. 3rd Fleet. Lawrence is a recipient of the Silver Star and the Distinguished Service Medal, the nation’s third highest military award, for his inspirational leadership while in captivity. U.S. 3rd Fleet leads naval forces in the Pacific and provides the realistic, relevant training necessary for an effective global Navy.