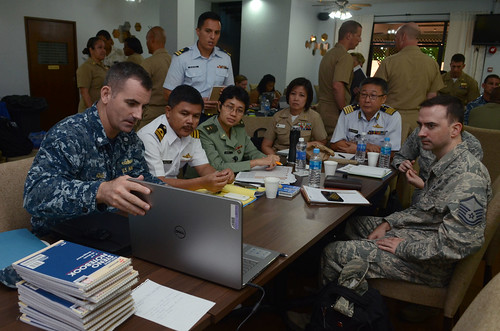 SINGAPORE - Members of the Pacific Partnership staff and partner nation representatives gathered in Singapore, Feb. 22-26, for a planning conference to hone details for an upcoming mission slated for the summer of 2016.

Now in its 11th year, Pacific Partnership is the largest annual multilateral humanitarian assistance and disaster relief preparedness mission conducted in the Indo-Asia-Pacific. This year's mission will be led by Commander, Destroyer Squadron (DESRON) 23, embarked on the hospital ship USNS Mercy (T-AH 19), and will include more than 600 military and civilian personnel from the U.S., Australia, New Zealand, Japan.

"This conference provides us an opportunity to plan with our partners and allies and build critical relationships for the upcoming mission," said Capt. Tom Williams, commodore of Commander, DESRON 23. "Pacific Partnership increases readiness, interoperability, and enhances cooperation with our partners across the region. We look forward to executing this year's mission."

Born out of the devastation wrought by the 2004 tsunami that swept through parts of Southeast Asia, Pacific Partnership began as a military-led humanitarian response to one of the world's most catastrophic natural disasters.

The mission has evolved over the years from primarily a direct care mission, to a mission focused on enhancing partnerships through host nation subject matter expert and civil-military exchanges. Pacific Partnership also capitalizes on multilateral cooperation and partnerships between government and non-government organizations to increase capabilities in humanitarian assistance and disaster relief (HA/DR) and preparedness for natural and man-made disasters.

"It's been a positive experience working and planning alongside all of the partner nations," said Wing Commander Michelle White, attached to the Royal New Zealand Air Force. "Everyone is on board with working together. We're taking guidelines and ideas from each other in order to do good work for our missions this year. It's been really positive all around."

"This year's Pacific Partnership will continue the momentum built from past year's missions," said Lt. Cmdr. Bryan Weatherup, a planning officer assigned to the U.S. 7th Fleet Task Force 73, the executive agent for Pacific Partnership 2016. "Through 11 years of Pacific Partnership, we are demonstrating our commitment to this region through persistent engagement and continued presence."