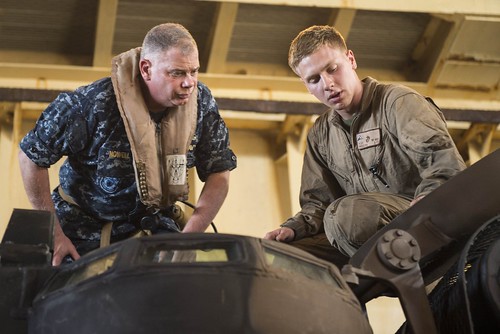 ESG 7 is a compilation of the U.S. 7th Fleet’s amphibious forces, serving as the Navy's only forward-deployed amphibious force, and is responsible for conducting expeditionary warfare operations that support a full range of theater contingencies, ranging from humanitarian and disaster relief operations.

“It’s great to be back at sea with Sailors and Marines,” said Rear Adm. John B. Nowell, Jr., commander, ESG 7. “With the successful completion of AIT/CERTEX this premier blue-green team is ready to demonstrate our capabilities as a Strike Group and the important role we have in maintaining security and stability within the Indo-Asia-Pacific region.”

Sailors and Marines aboard Bonhomme Richard and Germantown recently completed their amphibious certification exercise (CERTEX) where the blue-green team demonstrated a full range of maritime and sea-to-shore capabilities.

"CERTEX was an opportunity to put our interoperability to the test," said Capt. Ed Thompson, commander, amphibious squadron 11. "Integration with the 31st MEU is essential to the ARG's mission readiness. Each scenario demanded a series of aircraft, landing craft, equipment and personnel movements. The blue-green team drove the problem and safely executed the mission. I am proud of what we accomplished together."

The BHRESG is scheduled to participate in Ssang Yong 2016, a biennial combined amphibious exercise conducted by integrated MEB/ESG forward-deployed forces with the ROK Navy and Marine Corps in order to strengthen our interoperability and working relationships across a wide range of military operations from disaster relief to complex expeditionary operations.