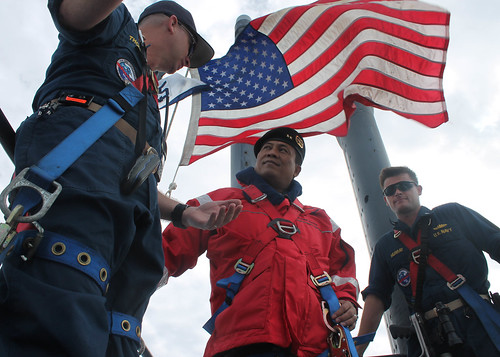 “Hosting Rear Adm. Darwanto and his staff aboard allows us to show them what we bring to the fight,” said Thompson. “Being able to demonstrate some of our capabilities is an opportunity for our guests to learn from us while we learn from them. The chance to exchange knowledge and build a foundation of interoperability is invaluable.”

The Indonesian visit to a Guam-based submarine demonstrates the enduring U.S. presence in the region and a long-standing commitment to cooperation among regional partners. Guam’s strategic location enhances military force flexibility. Its location allows freedom of action, regional engagement, crisis response and deterrence, while helping to fulfill commitments to U.S. allies and partners to protect our nation’s security.

“Our partnership with Indonesia is a great example of our combined commitment to the security and stability of the region,” Grimes said. “Stronger partnerships in the region, such as this visit, play a major role in the maritime security of the area.”

“This is my first visit to a U.S submarine, and I have been more than impressed with the professionalism and expertise they have exhibited on board USS Chicago,” said Darwanto. “It is an extraordinary example of teamwork and dedication to the mission.”

Darwanto sounded a positive note on the future of U.S.-Indonesian naval cooperation.

“Hopefully this visit won’t be only an opportunity to strengthen partnership but furthermore become a chance to enhance mutual cooperation in maintaining stability and security, mainly in the Western Pacific-Asia region,” he said.

Darwanto and his staff were appreciative of the visit and look forward to sharing their experiences with their counterparts in Indonesia.

“We appreciate [Chicago’s] effort to perform a set of demonstrations comprised of several roles on board a U.S. submarine,” said Darwanto. “It really shows us a bit of the differences between living on a diesel and nuke submarine.”

SUBRON 15 is located at Polaris Point, Naval Base Guam in Santa Rita, Guam, and consists of four Los Angeles-class attack submarines. The squadron staff is responsible for providing training, material and personnel readiness support to these commands. Also based out of Naval Base Guam are submarine tenders USS Frank Cable (AS 40) and USS Emory S. Land (AS 39). The submarines and tenders are maintained as part of the U.S. Navy’s forward-deployed submarine force and are readily capable of meeting global operational requirements.