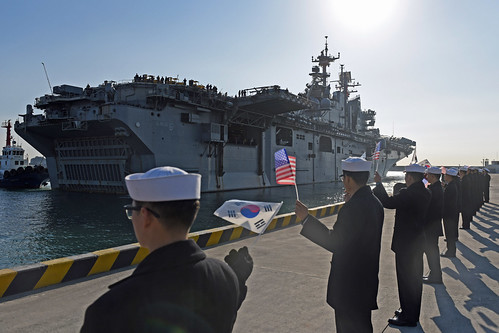 "This port call gives Sailors and Marines the opportunity to forge lasting relationships with our partner nation," said Capt. Jeffrey A. Ward, commanding officer, USS Bonhomme Richard. "They will also have some time off to recharge and experience the Korean culture."

The Sailors and Marines of the ESG will engage with members of the ROK Navy and conduct cultural exchanges where they will participate in several community relations projects, subject matter expert exchanges and host a reception aboard Bonhomme Richard with key U.S. and ROK Navy and Marine Corps leaders.

Following the port visit, the ESG and ROK Flotilla 5 ESG will get underway to commence exercise Ssang Yong 2016.

Ssang Yong 2016 is the largest multilateral amphibious exercise to date. It is a bi-annual exercise conducted by integrated MEB/ESG forward-deployed forces with the ROK Navy and Marine Corps designed to strengthen interoperability and working relationships across a wide range of military operations ranging from disaster relief to complex expeditionary operations.

Bonhomme Richard, Germantown and Ashland are forward-deployed to Sasebo, Japan and ESG 7, 3D MEB and 31st MEU are stationed in Okinawa, Japan. The BHRESG is currently on patrol in the U.S. 7th Fleet area of operations.