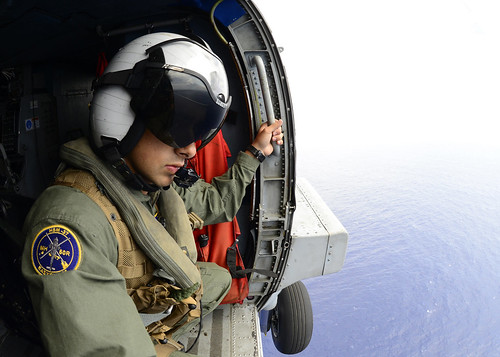 In this file photo, a naval air crewman watches out the door of an MH-60R Seahawk helicopter attached to Helicopter Maritime Strike Squadron (HSM) 37 as they conducted flight training operations over the island of Molokai, Hawaii, March 8. (U.S. Navy/MCC John M. Hageman)

The fishermen were found in a life raft adrift. The HSM-37 aircrew hoisted them aboard the helicopter and transported them to Kalaeloa Airport where they were then taken to Queen's Medical Center for evaluation.

HSM-37 is the only helicopter maritime strike squadron in the Middle Pacific (MIDPAC) region and provides a variety of helicopter services to MIDPAC-based combatant ships and submarines in addition to deploying operational detachments. HSM-37 detachments support all Pearl Harbor-based Arleigh Burke-class destroyers and Ticonderoga-class cruisers throughout the Western Pacific and Indian Oceans.