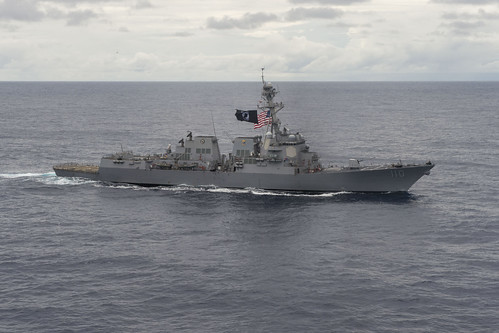 The JCSSG is the centerpiece of the U.S. Navy's Great Green Fleet, a yearlong initiative highlighting efforts to reshape energy use to increase operational capability and flexibility.

Despite her disaggregation from the JCSSG, Lawrence has continued to play her part as an integral asset of the Great Green Fleet. During the first two months of her deployment Lawrence used a blend of alternative biofuel and adopted additional fuel conservation procedures.

The result: sustained and independent operations at sea.

"By transforming energy use and awareness, we become a more flexible fighting force -- whether in the waters of the Western Pacific or in the waters we sail closer to home," said Rear Adm. Ron Boxall, Commander, John C. Stennis Strike Group. "That flexibility becomes more operational time on station, more time to build partnerships, and more time to promote peace and stability in the region."

During OMSI tasking, Lawrence burned an average of 20,159 gallons of fuel per day -- 4.4 percent of her total fuel capacity, which is 40 percent less than her average fuel burn rate in 2015.

"In conducting the OMSI mission, fuel conservation is an absolute must," said Lt. Quinn Matt, chief engineer aboard Lawrence. "Due to the geography of the region and the tyranny of distance, logistical support is in short supply over large swathes of the Pacific, especially for ships operating alone. By adhering to our fuel conservation measures, we were able to meet all our mission requirements and prolong operational endurance."

"OMSI was a great opportunity to engage with PIN in an enhanced capacity and to continue building our relationships and partnerships in the region," said Cmdr. Walter C. Mainor, commanding officer. "It was a privilege to be 3rd Fleet's OMSI platform and operate forward in the region."

Providing a ready force supporting security and stability in the Indo-Asia Pacific, Lawrence is operating as part of the John C. Stennis Strike Group and Great Green Fleet on a regularly scheduled 7th Fleet deployment.