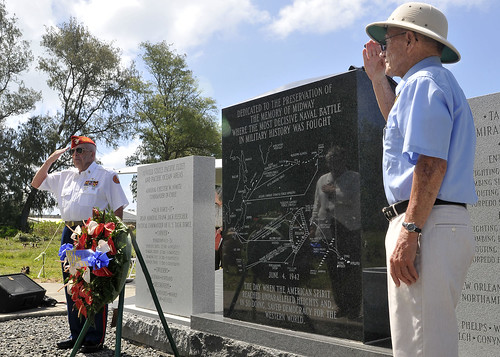 MIDWAY ATOLL - Two veterans of the historic Battle of Midway returned to the battle site June 4 to observe the 70th anniversary of the fierce conflict credited with changing the course of World War II in the Pacific.

Col. John F. Miniclier and Sgt. Ed Fox were among the Marines who laid their lives on the line against the Japanese attack, triumphing against all odds during the three-day assault in which the Americans were outnumbered and outgunned.

As former Secretary of Defense James Schlessinger once said of Midway, "The victory occurred despite the inferiority of our aircraft, the ineffectiveness of our torpedoes, the substantial absence of backup surface ships and our overall numerical inferiority."

The two veterans were among the approximately 150 people who attended the anniversary event Monday at what is now the Midway Atoll National Wildlife Refuge. Admiral Cecil D. Haney, Commander of the U.S. Pacific Fleet, and Robyn Thorson, Director of the U.S. Fish and Wildlife Service's Pacific Region, addressed the crowd of veterans and their families, military history enthusiasts and the people who work on Midway.

"This morning as we pay tribute to the greatest generation, we pray that this time of memorial rightly distinguished their honorable service and their courageous sacrifice," said Haney. "We think about the thousands of young men who over the course of a few short hours paid the ultimate sacrifice."

The commemoration was sponsored by the U.S. Navy and the U.S. Fish and Wildlife Service, which has operated the national wildlife refuge since taking responsibility for Midway's wildlife in 1988.

The Battle of Midway is considered the crucial turning point in the Pacific War. The Japanese lost all four aircraft carriers they had at Midway, preventing their naval forces from being an offensive force; while the U.S. lost only one aircraft carrier of the three they had there, largely due to the success of U.S. Naval intelligence to decode Japanese messages.

"This place that was once in the vortex of the long and violent struggle of men longing to be free is now eternally preserved as a place of tranquility, of natural beauty and abundant life," Thorson said.

Col. Miniclier, who was a 20-year old Private 1st Class at the time of the battle, recalled how he was stationed atop a 30-foot searchlight control tower where he could see U.S. planes take off for battle and he could count the incoming enemy planes. He watched as a U.S. plane was shot down and its pilot bailed out and deployed his parachute, only to be gunned by Japanese planes as he fell. "I watched that poor guy die," said Miniclier. "I made up my mind I was going to make it."

Sgt. Fox, also age 20 and a Private 1st Class at the time of the battle, was stationed in a machine gun bunker in the far corner of the island. He later went on to serve in the invasion of Iwo Jima following his service on Midway.

Returning to Midway 70 years later "is one of the greatest gifts one could offer a veteran," Fox said. "To be able to go back and peruse through one's indelible history is just one wonderful surprise gift."

Following the anniversary ceremony, Miniclier and Fox cut the ribbon together on a new exhibit in the refuge's visitor center memorializing the famous battle.

Haney joined Sailors and American World War II veterans for a small boat Floral Tribute as they released leis and flower petals in a ceremonial tribute to those who lost their lives seventy years ago.

The group then toured the wildlife refuge to experience firsthand how the former battle site had evolved into a world-class habitat for millions of birds and other species.

"As we gaze out over the multitude of wildlife reclaiming this place that once belonged solely to them, we see the legacy of life and freedom these brave soldiers fought for," Thorson said. "As these birds soar above us, they carry on their wings our hope that Midway will forever be a place of peace."

While the focus of Midway is now on wildlife, the lessons from this famous battle are still being told.

"Although 70 years ago, given this battles significance, historians are still writing about it, military planners are still studying it, and we cherish the opportunity to commemorate it," said Haney.