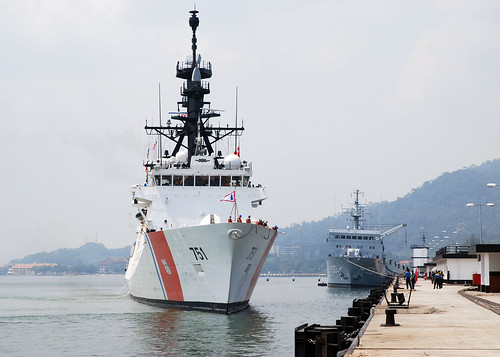 The exercise is designed to enhance maritime skills and operational cohesiveness among the participating forces. It also focuses on relationship building between military participants through professional military exchanges, sports and social events, and improving relationships with the civilian community through civic action projects and community service events.

"CARAT Malaysia 2012 is a fine example of what this exercise is all about," said Welch, who leads CARAT now for the second consecutive year. "We build on the past 18 years of cooperation, and find new exercises and methods to enhance our mutual understanding and build on the friendship and understanding between the armed forces of our great nations."

CARAT is a series of bilateral military exercises between the U.S. Navy and the armed forces of Bangladesh, Brunei, Cambodia, Indonesia, Malaysia, Republic of the Philippines, Singapore, and Thailand. Timor Leste joins the exercise for the first time in 2012.

While the training in each phase of CARAT varies based on shared goals of host nations and the U.S., a common theme is the development of maritime security capabilities, and increasing interoperability among participants. Skill areas exercised during CARAT include Maritime Interception Operations; riverine, amphibious and undersea warfare operations; diving and salvage operations; naval gunnery and maneuvering events, along with disaster response exercises.