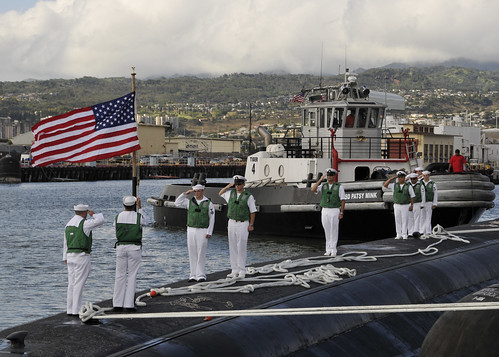 PEARL HARBOR, Hawaii - Friends and families of the crew from the USS Tucson (SSN 770) gathered at the submarine piers to welcome back the Los Angeles-class submarine as she returned to Joint Base Pearl Harbor-Hickam after completing a six-month deployment to the Western Pacific region, June 14.

"Tucson had a very successful deployment supporting the theater commander's operational priorities for the Western Pacific region, "said Cmdr. James O'Harrah, USS Tucson commanding officer. "The crew performed in an outstanding manner and I am very proud of their accomplishments and their professionalism."

During the deployment, 22 submariners became submarine qualified and are now entitled to wear the enlisted submarine warfare insignia also referred to as "Dolphins". A majority of the crew also completed advanced qualifications, including Engineering Watch Supervisor, Diving Officer of the Watch and Chief of the Watch. These qualifications provide greater watch bill flexibility and helped ensure that Tucson's performance will remain strong after the upcoming departure of many senior personnel and into her next deployment.

"This deployment provided excellent training to all of our crew by providing them valuable experiences to complement their extensive professional knowledge," said O'Harrah. "These experiences will serve them well as they continue their naval careers."

This was the first deployment for about one third of the 137 crewmembers according to O'Harrah. Electronics Technician Seaman (SS) Eric Ramirez, from Hermiston, Ore., and has been in the navy for two years, describes his first deployment as something he will never forget.

"This was a great learning experience for me. It enabled me to further my knowledge on submarine operations and become submarine qualified during my first deployment," said Ramirez. "The port visits also provided a great and unique culture observance being this is my first time traveling outside the U.S. I really enjoyed learning new things about different parts of the world."

This was Tucson's second Western Pacific deployment since she underwent a 23-month depot modernization period at Norfolk Naval Shipyard, Portsmouth, Va. Improvements included upgrades in all of her electronic systems, a complete overhaul of all machinery systems and a full external refurbishing. During that time she conducted numerous sea trials and a port visit in San Diego before conducting an inter-fleet transfer back to Naval Station Pearl Harbor in 2008.

Tucson is the second ship of the United States Navy to bear the name of the Arizona city. It is the 59th Los Angeles-class attack submarine and the 20th of the improved Los Angeles-class attack submarine to be built. Twelve vertical launch missile tubes for Tomahawk cruise missiles provide Tucson with great offensive capability. Retractable bow planes give the ship increased maneuverability and under ice surfacing potential.