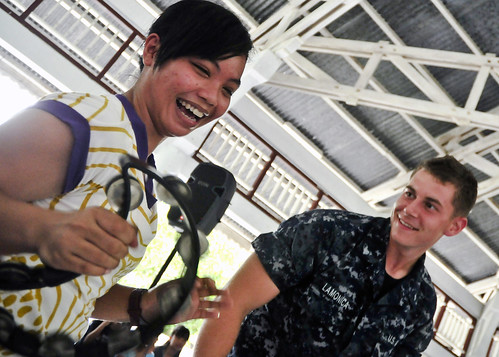 NORTH SULAWESI, Indonesia (June 11, 2012) Musician 3rd Class Steve Lamonica interacts with a local resident as she plays the tambourine during a U.S. Pacific Fleet Band concert on the island of Sangihe as part of Pacific Partnership. (Photo by Kristopher Radder)

MANADO, Indonesia - The U.S. Pacific Fleet Band gave the residents of Manado, Sangihe, Talaud, and Siau ten special performances and workshops at local shopping malls, elementary schools, and at medical clinics during a visit to the North Sulawesi province May 31 - June 15.

"Music is the universal language, and no matter how different our cultures, we still share the same appreciation for music," said Lt. Jeff Wrenn, officer-in-charge of the band. "Music is something we can all relate to. It provides common ground throughout cultures."

The band's performances in Manado included two large concerts at Mega Mall and Manado Town Square. They also played for a local elementary school and conducted interactive music assemblies with the students. The additional concerts and workshops were held on the outer islands and included support for ribbon cutting ceremonies to open new and refurbished medical and school buildings; during community service events at local schools; and, as part of the closing celebrations of Mercy's visit to the islands.

"There is immediate feedback and satisfaction when playing for children," said Senior Chief Musician Dereck Werner, leading chief petty officer for the band. "You can see the enthusiasm in their eyes and smiles and the band really feeds off their energy. It's amazing how quickly they can learn a new song by just listening."

The band is embarked to play at various receptions, ceremonies and community relations projects as part of the Navy's commitment to strengthen partnerships with Pacific and Oceanic nations.

The U.S. Pacific Fleet Band regularly performs around the Pacific and specializes in a variety of American music including jazz, Latin, country, R-and-B, hip-hop and rock.

Now in its seventh year, Pacific Partnership is the Navy's largest annual HCA mission in the Asia-Pacific region. Pacific Partnership is sponsored by the U.S. Pacific Fleet and focuses on working with host and partner nations, non-government organizations (NGOs) and other international agencies to ensure that the international community is better prepared to synchronize and function together as a coordinated force when natural disaster strikes.