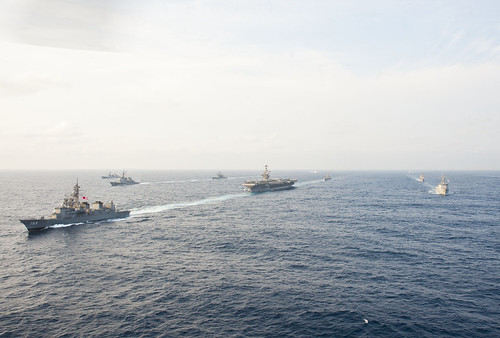 "The sea makes us one, which is a symbol of our unity," said Park. "The capability of our forces together is endless. I think it's meaningful to conduct exercises to maintain peace."

The U.S. Navy, JMSDF and ROK Navy are no strangers to conducting annual exercises together, but this marks the first trilateral exercise involving the respective countries and a carrier strike group.

George Washington and its strike group regularly participate in military operations and events to maintain the highest possible mission readiness and strengthen the bond with its allies and partners.

"It was my personal honor to visit the carrier and experience everything," said Park. "I'm very proud of George Washington!"

George Washington departed Fleet Activities Yokosuka on May 26 for its 2012 patrol. George Washington and its embarked air wing, Carrier Air Wing (CVW) 5, work to protect and defend the collective maritime interest of the U.S. and its allies and partners in the Asia-Pacific region.