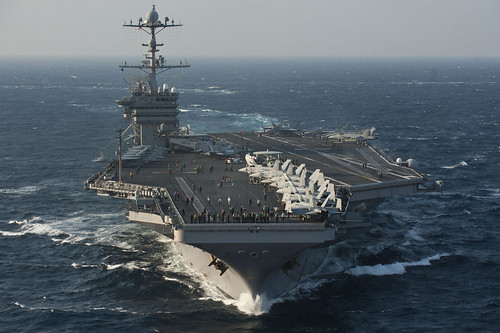 The George Washington Carrier Strike Group (GWCSG) is conducting routine operations with the Republic of Korea navy in the Yellow Sea.

The operations are taking place beyond the territorial seas of any coastal nations and are intended to reinforce regional security and stability, enhance interoperability with allies, and enhance operational proficiency and readiness. The operations include integrated flight operations, surface and anti-submarine warfare training, air defense, replenishment at sea, dynamic ship maneuvers and liaison officer exchanges.

The U.S. Navy frequently operates in international waters around the world and has conducted numerous operations and exercises in this area. In October 2009 and November 2010 the GWCSG conducted similar operations in the waters west of the Korean Peninsula. U.S. aircraft carriers frequently visit the Korean Peninsula, such as USS George Washington in September 2011 and November 2010, USS Carl Vinson (CVN 70) in January 2011, USS John C. Stennis (CVN 74) in March 2009, and USS Ronald Reagan (CVN 76), USS Nimitz (CVN 68), and USS George Washington in 2008.

The U.S. Navy is committed to helping enhance the security and stability of the Asia-Pacific region, and our forward presence activities and engagements in this region are routine. U.S. military operations and exercises are a part of a larger forward presence posture to strengthen our alliances, partnerships, and established security cooperation activities. U.S. forward presence is in accordance with international law, preserves the rights, freedoms, and uses of the sea guaranteed to all nations, and contributes to economic development and international commerce.