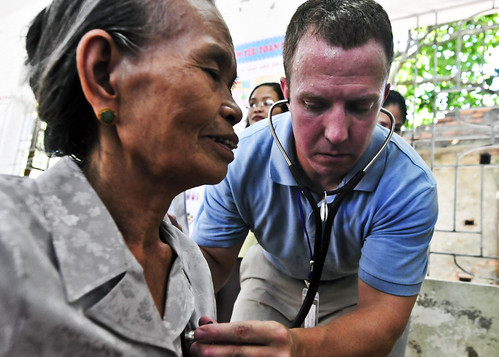 VINH, Vietnam - A U.S. Sailor's response to a Vietnamese woman's cries for help saved a man's life while in Vinh, Vietnam for Pacific Partnership 2012 (PP12) July 10.

Lt. Cmdr. Marion Gregg, a physician, found Walter Rebeyka, a Canadian physician, in cardiac arrest on the ground outside the lobby of his hotel.

"I tried to initially see if he was responsive and able to communicate, in case he was on the ground because of lightheadedness," said Gregg.

According to Gregg, Rebeyka was non-responsive, so he asked for someone to call an ambulance and started checking for breathing sounds and a pulse.

"I did CPR for 15 minutes until the ambulance arrived and continued CPR for another five minutes on the way to Friendship General Hospital until his heart restarted and he started taking spontaneous breaths," Gregg said.

During those frantic moments, another passerby physician saw what was happening and assisted Gregg.

"After 15 minutes the patient did not have a pulse and I started to lose hope, but Dr. Gregg kept doing strong CPR...five minutes later, I felt a pulse," said Dr. Nguyen Dinh Toan.

"Together, we saved him and I trusted and had confidence in Gregg the entire time," said Toan.

Toan later visited Rebeyka in the hospital, who had a message for Gregg.

Army Staff Sgt. Matthew Vidmar, who witnessed the event, said the experience truly showed what it means to be a doctor.

"Dr. Gregg showed care to a human being that needed life saving services," Vidmar said. "He responded and didn't second guess what he was doing. It really speaks volumes about what kind of professional he is and how much he cares about the lives of others."

For Gregg, the experience was humbling, "It could have been me or my father, mother, sister, wife or even my daughter laying there ... I did what I think any medical professional would have done."

Vidmar said knowledge and training was a key factor to quick response of everyone involved.

"It shows that whatever knowledge or training you bring into a situation, whether it is a large scale or small crisis, can be essential to save a life."

PP12 personnel are in Vietnam until July 24 to provide no-cost medical, dental, optometry, and veterinary care, as well civil engineering projects throughout the Hung Nguyen district.

Now in its seventh year, Pacific Partnership is the largest annual humanitarian and civic assistance mission in the Asia-Pacific region that brings together U.S. military, host and partner nations, non-governmental organizations and international agencies, and is designed to build stronger relationships and disaster response capabilities.