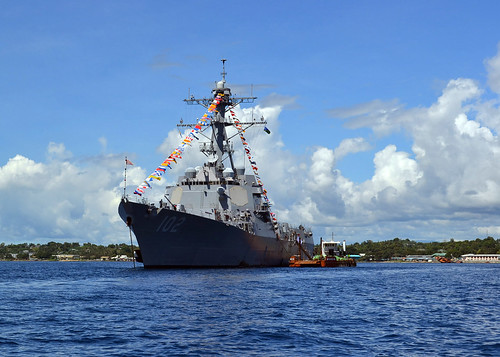 Sampson passed through "The Slot" (New Georgia Sound) on her transit to Guadalcanal from her last port visit in Singapore.

"This has been an amazing voyage for us," said Cmdr. Dwayne Ducommun, Sampson's commanding officer. "It is awe inspiring to think of the bravery and the tenacity of the Sailors who fought on these waters 70 years ago. They were young men like those who now serve on Sampson. We are proud to be here to honor their sacrifices and humbled in their presence."

Sampson's crew and top officers will attend formal receptions hosted by the Consular Agent and Solomon Islands Government. Also, several Sailors from the ship will go to a ceremony to unveil the Honor Board for the Coast Watchers and Solomon Scouts, and others will participate in sporting activities with the local community.

"We have numerous Sailors who really enjoy playing sports with the local community in ports we visit. Friendly competition and cultural experiences are easily shared despite language barriers," said Ducommun.

The ship will host tours of the ship for local dignitaries. There will also be a memorial service onboard to honor Ensign Henry Whitehurst who died in an attack on the USS Astoria on Aug. 9, 1942. The local VFW post in New Bern, NC, is named in honor of Ensign Whitehurst, and the commander of that VFW post is the stepfather of Lt. j.g. Nicholas Hurley, the Assistant Operations onboard Sampson.

USS Sampson deployed from San Diego in February 2012 and is currently operating in the 7th Fleet area of operation in support of maritime security operations.