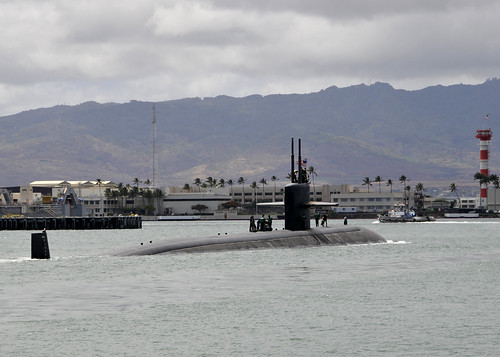 PEARL HARBOR, Hawaii - Friends and families of the crew from USS Olympia (SSN 717) gathered at the submarine piers at Joint Base Pearl Harbor-Hickam to say goodbye as the Los Angeles-class submarine departed for a scheduled Western Pacific (WESTPAC) deployment, Aug. 8.

"We have been preparing for this deployment for over 18 months, so the crew is eager to put the countless hours of training and hard work into action," said Cmdr. Michael Boone, USS Olympia commanding officer. "It will be a demanding six months, but Olympia is ready and willing to take on any challenge that is presented to us."

Since returning from her last Western Pacific deployment in 2010, Olympia finished undergoing deperming, the first submarine to complete this treatment at the new drive-in submarine magnetic silencing facility Dec. 15, at Joint Base Pearl Harbor-Hickam's Beckoning Point. She has also undergone maintenance and her crew has conducted training in preparation for this deployment.

"Like any deployment workup, we have encountered some unexpected things but we remained on track and haven't lost focus on our mission," said Boone. "Our deployment goals are to successfully complete the assigned tasking given to us; take care of the crew to ensure morale stays high, have the opportunity to see new places and most importantly of all, return home safely."

With a crew size of 141, this will be the first time deploying for 39 of Olympia's Sailors, according to Boone. This will be the first deployment for Electronics Technician Seaman Apprentice Christopher Cummings from Ada, Okla. and who has been in the Navy for one year.

"I am really excited to be deploying. I have been looking forward to this day since I checked onboard Olympia," said Cummings. "My goal is to further my training and become submarine qualified and I am also excited about traveling the world and seeing new places."

Measuring 362 feet long, weighing 6,130 tons when submerged, Olympia is one of the Navy's most technologically sophisticated submarines.