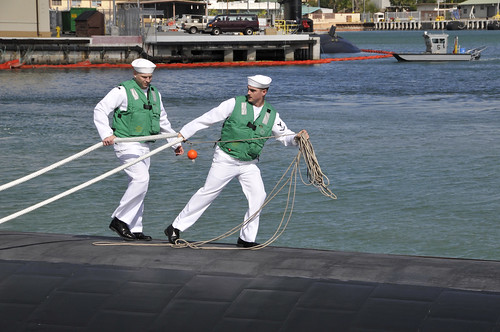 PEARL HARBOR, Hawaii - Friends and families of the crew from USS Louisville (SSN 724) gathered at the submarine piers to welcome back the Los Angeles-class submarine as she returned to Joint Base Pearl Harbor-Hickam after completing a six-month deployment to the Western Pacific (WESTPAC) region, Aug. 8.

"I am extremely proud of the crew of the Louisville. They accomplished tasks in support of both theater and national interests with great enthusiasm and skill," said Cmdr. Lee Sisco, USS Louisville commanding officer. "This was the most rewarding and successful deployment out of the seven WESTPAC deployments I've conducted."

While deployed, Louisville executed a wide range of operations in support of Commander Seventh Fleet. In addition, she conducted several training exercises, contributing to the nation's strategic posture in the Western Pacific region. Louisville also strengthened relationships with Japan during an exercise with the Japan Maritime Self Defense Force.

During the deployment, 26 Sailors qualified in submarines and are now entitled to wear the submarine warfare insignia, also referred to as "Dolphins", after completing a rigorous qualification process that included in-depth understanding of submarine construction and operations, and also practical assessments of the Sailor's ability to combat a wide range of casualties that could be encountered while onboard the submarine. A majority of the crew also completed advanced qualifications, including Engineering Watch Supervisor, Diving Officer of the Watch and Chief of the Watch. These qualifications provide greater watch bill flexibility and help ensure that Louisville's performance will remain strong.

"We left on WESTPAC with a fairly junior crew but, they worked hard to keep the ship clean and stowed, and rapidly became qualified for senior watch stations," said Master Chief Fire Control Technician (SS) Joseph Bransfield, Louisville Chief of the Boat.

Despite steaming over 40,000 nautical miles in support of the nation's defense, the crew enjoyed several memorable port visits which included Sasebo and Yokosuka, Japan, Sepangar, Malaysia and Subic Bay, Philippines.

"Within the last six months I have been able to experience many different cultures during each port visit which has been both exciting and humbling," said Electronics Technician 2nd Class (SS) Erick Hahn.

During their Malaysia visit, Louisville and the submarine tender USS Emory S. Land (AS 39) hosted a reception for Secretary of Defense, the Honorable Ray Mabus, and Malaysian Chief of Naval Operations, Adm. Tan Sri Abdul Aziz Jaafar. This event directly contributed to further cooperation between the two countries' respective navies according to Sisco.

Louisville is the fourth United States ship to bear the name in honor of the city of Louisville, Ky. She is the 35th nuclear powered fast-attack submarine of the Los Angeles-class design.