Howes Turns Over Command of SUBDEVRON 5 To Jablon 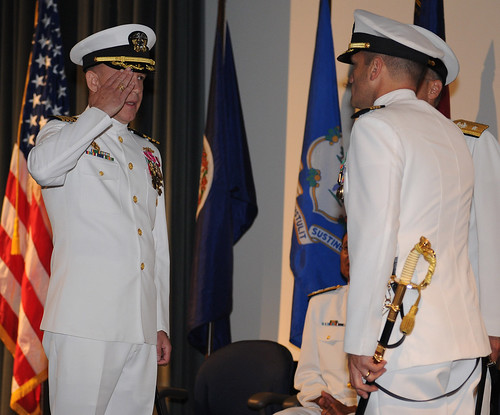 KEYPORT, Wash. - The commander of U.S. Pacific Fleet, Adm. Cecil Haney, was among the honored guests as Capt. Brian Howes turned over command of Submarine Development Squadron (SUBDEVRON) 5 to Capt. Jeffrey Jablon on Aug. 10 at the Naval Undersea Museum.

"Thank you for what you do each and every day. You keep me proud, motivated and convinced that each and every generation of American is greater than the last," said Howes in his farewell remarks to his staff. "These accomplishments we just discussed were not the result of the squadron, but the result of you - the hard-working, passionate, professional Sailors in our submarines, detachments and staff."

"Our Navy will remain committed to this vital (Pacific) region, where we will continue to play a prominent role on the high seas, the littorals, in the air, on the ocean's surface and most certainly beneath the waves," said Haney, the ceremony's guest speaker.

"Given the importance of the undersea domain in this endeavor, it is great to have DEVRON 5 on the same team. Brian, your clear vision and steady hand at the helm of one of the Navy's most complex submarine major commands has been instrumental in the tremendous success enjoyed by DEVRON 5."

Howes' next assignment will be in Washington, D.C., where he will serve on the staff of the Chief of Naval Operations as part of the Quadrennial Defense Review Team.

"I am proud to have been a member of this great team, and I am proud to wear the Deep Submergence Insignia as a badge of honor of my service in DEVRON 5," Howes said. "I consider myself to be your number one fan, and I will always be grateful to you for your service, your sacrifice and for making this the best two years of my naval career."

Jablon, a native of Frostburg, Md., arrives from the staff of the Naval Submarine School in Groton, Conn., where he was the Prospective Commanding Officer instructor. His operational assignments included tours as executive officer of USS Key West (SSN 722) and commanding officer of USS Philadelphia (SSN 690).

"Exemplified by excellence, DEVRON 5 is comprised of the best and the brightest officers and Sailors," Jablon said. "I look forward to working with the DEVRON 5 staff, detachments and submarines in continuing the legacy of excellence established by our predecessors and displayed so evidently during my turnover period."