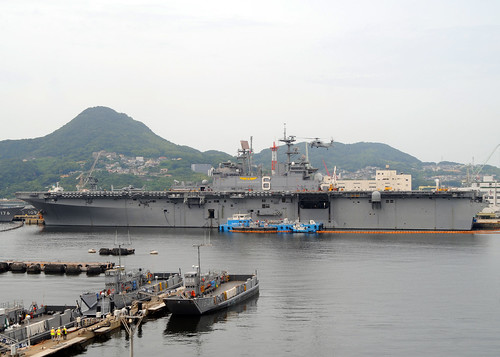 Bonhomme Richard entered the 7th Fleet area of operations on Apr. 23 after completing a hull-swap with the USS Essex (LHD 2). Over the past three months the crew of the Bonhomme Richard has been training extensively in preparation for the ship’s first patrol since moving to Sasebo.

“The hard work and dedication of Bonhomme Richard Sailors getting the ship ready for this patrol has been amazing to watch,” said Capt. Daniel Dusek, Bonhomme Richard’s commanding officer. “I’m very proud of the crew and look forward to bringing Marines aboard to see what this ship can do when operating at its full capability.”

Bonhomme Richard’s first event will be AIT, where Sailors and Marines will work together training their amphibious operations skills sets in preparation to certify during CERTEX.

Immediately following AIT is CERTEX, which is conducted for the MEU and is performed as a requirement to be certified. This certification proves the MEU’s ability to perform special tasks provided to the Fleet Marine Force, or foreign uniformed services of maritime regions worldwide.

“The integration between Sailors and Marines helps to achieve the overall success of not only crew certification, but overall mission performance,” said Gunnery Sgt. Christopher Pearo. “I fully expect to see the MEU certify in perfect form.”

“I am really looking forward to experiencing life at sea and getting a real feel for it,” said Seaman Apprentice Maria Burnham. “This is what I joined the Navy to do.”

Bonhomme Richard, commanded by Capt. Daniel Dusek, is the lead ship of the only forward-deployed amphibious ready group.