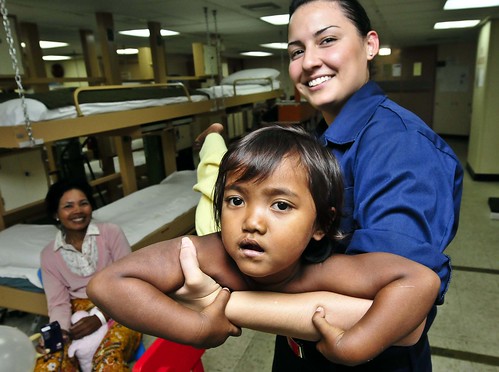 Hospitalman Stephanie Montenegro plays with a Cambodian patient while her mother looks on in the pediatrics ward aboard the hospital ship USNS Mercy (T-AH 19) during Pacific Partnership 2012. (Photo by Kristopher Radder)

Cambodia was this year's fourth and final mission port, bringing an end to nearly three full months of cooperation in Southeast Asia.

While in Cambodia the PP12 team of more than 1,200 spent 14 days at the invitation of host country to take part in many evolutions ranging from medical civic action projects (MEDCAPs) to community service projects.

"I would like to express our gratefulness and a warm welcome to the fruitful results of the Pacific Partnership 2012 mission," said Vice Adm. Tea Vinh, Commander, Royal Cambodian Navy. "This is a testimony that reflects the progress and sustainability of our friendships and cooperation, between the partner nations, and between Cambodia and the U.S."

United States Ambassador to Cambodia, William E. Todd, was in attendance at the closing ceremony.

"When you're a U.S. Ambassador or a U.S. Foreign Service Officer, we have many tools in our tool bag, but one of the best and most effective is a partnership between our military and foreign militaries, giving humanitarian and civic assistance," said the Ambassador. "This type of mission builds the U.S. relationship here ten-fold over a lot of other things we do."

USNS Mercy and her crew now set sail to the eastern horizon to make a couple of logistical stops, drop off members of the team, and return to her homeport of San Diego.

As the PP12 Mission Commander, Capt. James Morgan, prepared to depart the pier to transit back to the Mercy, he stated, "It's been a pleasure to be in Cambodia and I would like to thank the government and military in Cambodia for inviting us to be here."

"We had a great mission because of the cooperation and assistance we had from the local government and the military," said Morgan. "I hope there will be a mission here again soon."

Sponsored by the U.S. Navy Pacific Fleet and now in its seventh year, Pacific Partnership is the largest annual humanitarian civic assistance mission in the Asia-Pacific Region.