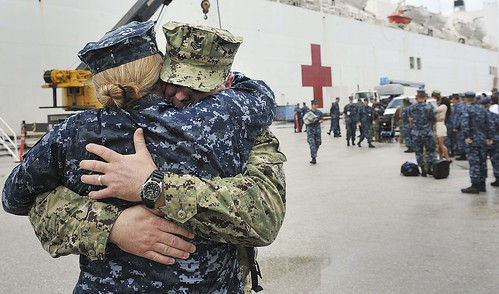 While in Guam, Mercy will detach personnel and unload equipment that played a critical role in providing medical, dental, engineering and veterinary services to the four host nations of Indonesia, Philippines, Vietnam and Cambodia during PP12.

As a former resident of Guam, the commanding officer of the hospital or Medical Treatment Facility aboard Mercy, Capt. Timothy Hinman, said he enjoyed seeing the reunions that took place on the pier with family members, but will also miss the camaraderie of the many medical staff taking flights back home.

"This mission has accomplished a lot in a short amount of time. We built up some very strong bonds with each other and our counterparts in the host nations, and with our foreign military and NGO partners," said Hinman. "Everyone welcoming home their service member or loved one from Pacific Partnership 2012 can be tremendously proud of what they achieved during this mission."

At the invitation of the host nations, PP12 brought the expertise of U.S. service members and personnel from 13 partner nation militaries and 23 non-governmental organizations to treat and evaluate more than 49,000 people.

Numerous academic and professional subject matter expert exchanges also took place this year, ranging from from surgeries, to veterinary care, to culinary and cultural learning. Additionally, 887 surgeries were performed on board Mercy or ashore in host nation hospitals, approximately 7,000 animals were treated, 13 buildings were built or refurbished and 104 community service projects were completed, including donations of 244 pallets of supplies requested by the host nations.

PP12 Mission Commander Capt. Jim Morgan said during the closing ceremony in Cambodia that the really important parts about this mission are the professional and cultural exchanges that go on between militaries, governments, health departments, medical practitioners, engineers, non-government organizations and volunteers, as well as the local populations.

"It's through increased understanding and trust that we will all work better and more efficiently together - not if, but when - a natural disaster strikes," said Morgan.

Mercy will also visit Hawaii before it reaches its homeport of San Diego in mid-September.