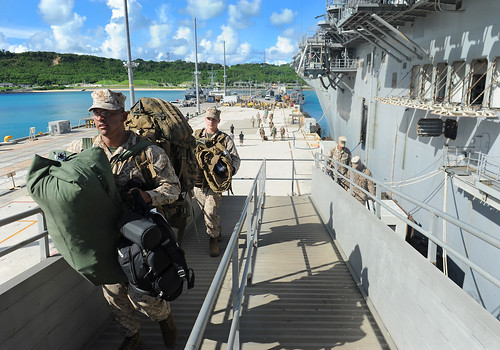 "Bringing the Marines and Navy together to conduct this training is very beneficial," said Cmdr. John Barnett, commanding officer of amphibious dock landing ship USS Tortuga (LSD 46). "We will deploy to various spots around the Western Pacific to do bilateral and multilateral training to help develop relationships with our counterpart Navies and Marine Corps throughout the area of responsibility.

Upon arrival of the 31st MEU aboard Bonhomme Richard ARG, all of the required assets needed to conduct amphibious assaults, raids, noncombatant evacuations and humanitarian assistance are in place.

Planning before an embarkation is crucial for both the Navy and the Marines.

"I think pre-planning is the most important part of an embarkation," said Lt. Douglas Macintosh, Amphibious Squadron (PHIBRON) 11. "During an embarkation, there are thousands of individual moving parts that must be sequenced properly or the embarkation can go from a quick evolution to being very chaotic." Some of the training evolutions that will take place aboard Bonhomme Richard, Tortuga and Denver include: Amphibious Integration Exercise (AIT), Certification Exercise (CERTEX) and Amphibious Landing Exercise (PHIBLEX).

"Marines are definitely living up to their name," said Gunnery Sgt. Antonio Serrano, PHIBRON 11, combat cargo assistant. "Marines are supposed to fight from land, air and sea. Jointly, Marines and the U.S. Navy are able to execute amphibious operations via helicopters or landing craft to provide rapid response to any country."

The 31st MEU, ARG, PHIBRON 11 and Naval Beach Unit 7 all team up to create one of the most flexible forces in the Asia-Pacific, which is capable of accomplishing numerous missions anywhere in the world.

The Bonhomme Richard ARG is currently operating in the 7th Fleet Area of Operation and reports to the Commander, Amphibious Force 7th Fleet, Rear Adm. Jeffrey A. Harley, who is headquartered in Okinawa, Japan.