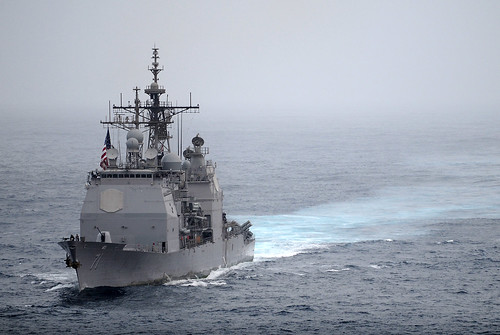 SAN DIEGO - The guided-missile cruiser USS Cape St. George (CG 71) is scheduled to return to San Diego Aug. 22 after a deployment that took them around the world as part of the Abraham Lincoln Carrier Strike Group.

Cape St. George, commanded by Capt. Don Gabrielson, sailed over 70,000 nautical miles, the equivalent of three and a half times around the equator while deployed. Cape St. George served as Air Defense Commander in the Fifth Fleet Area of responsibility for six months monitoring several million square miles of waters with roughly two dozen ships and subsequently escorted the aircraft carrier USS Abraham Lincoln (CVN 72) to its new homeport of Norfolk, Va. Cape St. George passed through the Suez Canal and the Panama Canal during its global circumnavigation.

Cape St. George is named after the World War II battle fought in the South Pacific off the island of New Ireland in the Bismarck Archipelago on November 25, 1943. During the battle, the ships of Destroyer Squadron Twenty-Three, commanded by then-Captain Arleigh Burke, sank three of five enemy warships without suffering any damage to U.S. ships.