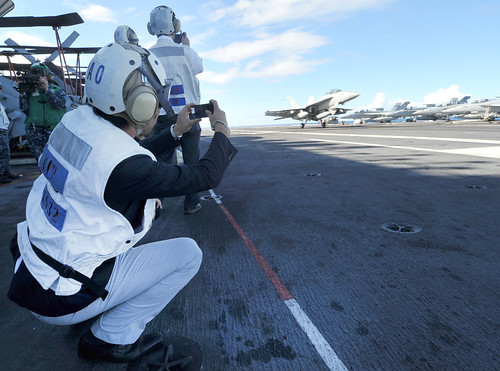 The representatives visited the ship to observe the day-to-day operations aboard the aircraft carrier, which operates out of Yokosuka, Japan, to understand the ship's mission within the U.S. 7th Fleet area of operations.

After being welcomed by Capt. G. J. Fenton, George Washington's commanding officer, the visitors were split into two groups and began touring the ship. "It's one thing to talk about what the U.S. Navy does, but it's a whole other thing to provide Japanese officials first-hand experience," said Capt. Kenneth Reynard, George Washington's executive officer.

Out on the navigation bridge, the guests experienced a glimpse of day-to-day flight operations and the young men and women responsible for steering the ship. While some toured the bridge and looked upon the ship's flight deck, others gladly took a moment to sit on the captain's chair and pose with Fenton.

After descending a flight of stairs, guests were escorted to the flag bridge to witness aircraft launch and recovery. The visitors then donned flight gear and were escorted onto the flight deck to get a first-person view of the men and women hard at work during flight operations.

"It was really neat to see aircraft launch and land at such a close distance," said Yukfuko Oikawa, a political assistant with the U.S. Embassy.

"It's amazing to see all the people who make this possible."

The visitors were then escorted to the hangar bay, medical, the galley and the ship's store.

As the tour came to a close, the group received gifts and a certificate honoring them as "tail-hookers," a title given to those who land aboard the flight deck via C-2A Greyhound.

"I got to know what people are doing aboard George Washington to help out Japan," said Oikawa. "I hope the Navy continues to serve this mission and help us out."

Inviting guests from regional partners on tours aboard George Washington gives them the opportunity to first-hand witness the ship's operations, understand the ship's mission and foster relations with other nations. "The tours show other nations what we're all about," said Reynard. "It gives them an idea of why our ship is in or near their country. Being able to navigate in international waters is important to our mission. We gain a lot by giving tours of our ship."