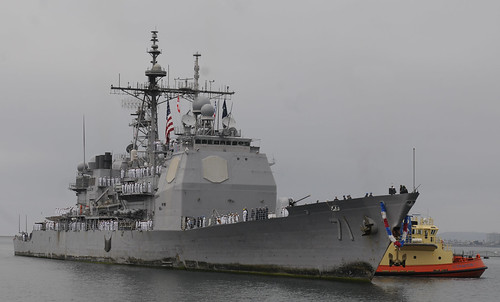 Cape's crew completed a nine-month deployment in support of the U.S. 5th, 6th and 7th Fleet areas of responsibility (AOR) while operating forward.

Cape sailed more than 70,000 nautical miles, the equivalent of three and a half times around the Earth at the equator. Cape completed 259 days deployed, more than 230 of them at sea, with 105 days supporting Operation Enduring Freedom.

"It's been a lifelong dream to sail around the world," said Capt. Don Gabrielson, commanding officer of Cape St. George. "To accomplish this alongside Cape's amazing Sailors was an honor and a privilege beyond words. It was a huge challenge, but it was just as rewarding as it was difficult."

"It was a great experience to serve aboard Cape," said Lt. Brock Magnino, one of the pilots assigned to HSM-77. "Capt. Gabrielson and the rest of the crew were very supportive, and it felt good to help them out as much as we could. We definitely felt like a part of the family."

"It was a long, but memorable deployment," said Culinary Specialist 3rd Class Harvey Xavier. "Our ship has come a long way and made many accomplishments since 2008. It feels good to serve on a ship that's been around the world. Not many people are able to say they've been where we've been or did what we've done."

Cape received many visitors throughout the deployment, including: Commander, U.S. 5th Fleet, Vice Adm. John Miller; country music superstar, Toby Keith; Miss America 2011, Teresa Scanlan; as well as "Cooks from the Valley" who supplied and grilled fresh steaks for 12 ships at sea for the Fourth of July.

"We have to recognize our families, friends and supporters who kept us going," said Gabrielson. "While we were deployed, so were they because they were away from us. We wouldn't have been able to complete the mission without their love and support. The crew shows our appreciation."