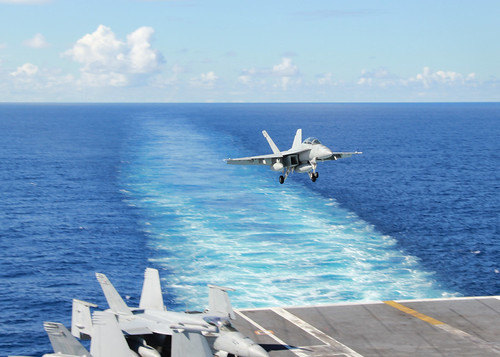 Carrier qualifications are a series of touch-and-go and arrested landings that pilots are required to complete before they begin normal flight operations. Pilots complete these two to four-day exercises to maintain proficiency and mission readiness.

Carrier qualifications are essential to the safety of the pilots and Sailors who conduct flight operations. Pilots embarked on an aircraft carrier fly to maintain their qualifications. If they have not made an arrested landing on a carrier within a 29-day period, they are required to conduct flight exercises to regain the muscle memory that is essential to landing on an underway aircraft carrier.

"The difference between landing on a ship and landing on a field is that a ship is moving and turning," said Capt. Michael Boyle, commanding officer of CVW 5. "It is important for the pilots to put the tools that they have learned in training to use."

Piloting an F/A-18 Super Hornet aboard George Washington requires pilots newly assigned to the ship to be top graduates and complete additional schooling.

"We do a tremendous amount of training here, so young pilots who are assigned to [CVW 5] walk away with a lot of flight time, arrested landings and experience," said Boyle.

Carrier qualifications not only prepare pilots for the second half of their patrol, but also prepare the strike group for its next exercise with regional partners.

"In the 7th Fleet area of operations, we have to exercise George Washington and the strike group to show potential adversaries that we mean business and that we know what we are doing," said Boyle.

George Washington and CVW 5 provide a combat-ready force that protects and defends the collective maritime interest of the U.S. and its allies and partners in the Asia-Pacific region.