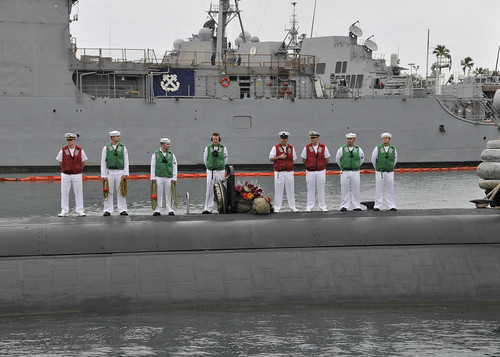 "Columbus' 2012 deployment was very successful. We executed fleet and national tasking as well as numerous exercises and theater cooperation with our regional allies," said Cmdr. David Youtt, USS Columbus commanding officer. "Our crew gained extensive experience operating in vastly different environments and engaging with different cultures. We are a better ship and crew as a result and are better prepared to face future operations."

While deployed, Columbus executed a wide range of operations in support of Commander Seventh Fleet. In addition, she conducted several training exercises, contributing to the nation's strategic posture in the Western Pacific region.

"The crew performed superbly through deployment," said Youtt. "Each Sailor faced everyday with enthusiasm and professionalism that was second to none."

During the deployment, 28 Sailors qualified in submarines and are now entitled to wear the submarine warfare insignia, also referred to as "Dolphins", after completing a rigorous qualification process that included in-depth understanding of submarine construction and operations, and also practical assessments of the Sailor's ability to combat a wide range of casualties that could be encountered while onboard the submarine. A majority of the crew also completed advanced qualifications, including Engineering Watch Supervisor, Diving Officer of the Watch and Chief of the Watch. These qualifications provide greater watch bill flexibility and help ensure that Columbus' performance will remain strong.

"This deployment offered significant experience and training for the young Sailors that will be the leaders of our Navy," said Youtt. "More than half the crew deployed for the first time and are now experienced future deployers."

Despite steaming more than 40,000 nautical miles in support of the nation's defense, the crew enjoyed several memorable port visits which included Guam, South Korea and, Japan. Columbus also conducted a time-honored ceremony of "Crossing the Line" where 100 Sailors earned the title of "Shellback" for crossing the equator for the first time.

"I really learned alot about submarines and my job on this deployment, but the best part is when I became submarine qualified and got my Dolphins," said Electronics Technician Seaman (SS) Jonathan Diquattro from Columbus, Ga. "The experience I gained and the places we visited makes my first deployment something I will never forget."

USS Columbus is the fifty-first Los Angeles-class submarine and the twelfth improved version of this class, which includes a vertical launch system for Tomahawk cruise missiles and an improved hull design for under-ice operations. She completed a post shipyard availability in June 1994 in Groton, CT after initial construction and shakedown operations. In September 1994, the ship conducted an inter-fleet transfer to Pearl Harbor, Hawaii, and joined the U.S. Pacific Fleet Submarine Force.