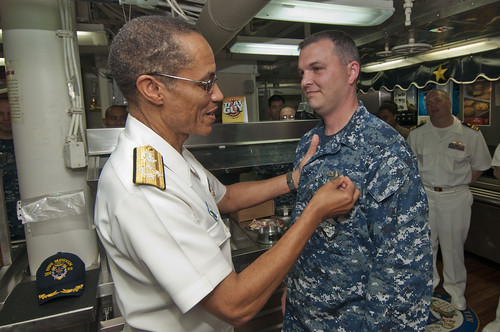 At this year's symposium, held in Malaysia's capital, Kuala Lumpur, Haney was the senior U.S. representative in attendance. The biennial event, which began in 1988, hosts senior leadership from 24 countries who come together to increase naval cooperation and the ability to operate together.

During Haney's visit onboard Mustin, he received a tour of the ship and held an all hands call where he answered questions from the crew. He personally thanked them for their diligent work and spoke about the importance of the U.S. Navy's role in the 7th Fleet.

"It is always special when I have an opportunity to visit the men and women of our forward deployed naval forces," said Haney. "For more than 70 years our Navy has maintained a strong and purposeful presence in the Western Pacific and after my visit to USS Mustin, it is clear that this team remains ready to safeguard peace and stability in the vital Asia-Pacific region."

"It was a great honor and thrill to have the boss onboard today," Ring said. " It was a special treat for the crew to visit with the Pacific Fleet Commander."

"It was an honor to have the admiral pin me," Ransom said. "It was great having Adm. Haney onboard Mustin, he got a chance to see a great Navy ship and outstanding crew. He provided us with a lot of good insight. It was nice for him to take some time out of his very busy schedule to come and see us today."

Mustin Sailors said they were pleased with the chance to meet Haney and to hear his appreciation for Mustin's efforts in the 7th Fleet as well as his thoughts on the Navy's performance and future in the Pacific.

"He had a lot of great things to say about Mustin, I was really happy to hear we work really hard as a team out here, most recently during Valiant Shield 2012," said Culinary Specialist 3rd Class Krista Crumbly from Pensecola, Fla. "I am happy to know he recognized our efforts and had the chance to thank us in person."

"I think it was great for the admiral to come visit our ship today," said Seaman Mohamed Kargo of Bronx, N.Y. This is my first ship in the Navy and I have already met the leader of the Pacific Fleet, it's hard to believe, but I am happy I got the chance."

Mustin, commanded by Cmdr. Joseph Ring, is one of seven guided missile destroyers assigned to Destroyer Squadron (DESRON 15) and is forward deployed to Yokosuka, Japan.