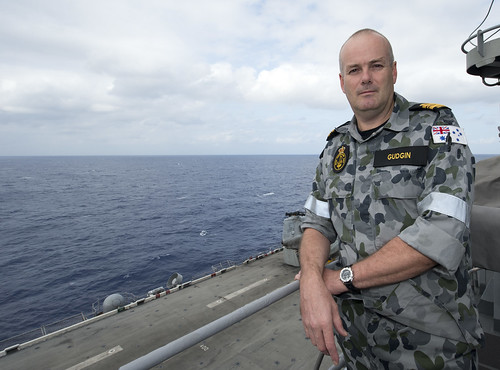 PACIFIC OCEAN - The U.S. Navy and Royal Australian Navy are continuing to strengthen their partnership with an exchange program aboard amphibious assault ship USS Bonhomme Richard (LHD 6) on deployment in the Western Pacific.

Gudgin moved to Sasebo, Japan in 2011 for a two-year exchange billet with PHIBRON 11. There he lives, works and deploys with the Amphibious Ready Group's (ARG) ships and staff.

"I am the only permanently embarked foreign officer in the ARG," said Gudgin. "I look after long range planning including port visits during our deployments. I am not directly influencing this deployment but (will) future deployments including next year's Talisman Saber exercise and associated Australian port visits."

Talisman Saber is a biennial exercise that provides the opportunity to conduct operations in a joint environment that increases the U.S and Australia's ability to plan and carry out contingency responses including humanitarian assistance and combat missions.

"The world is a complicated place and it is very rare that an ally will operate alone," said Gudgin. "Australia and the U.S. have very close military ties. We have been involved with the U.S. in nearly every conflict in the region and in the Middle East. We are ensuring that if we are called together again in time of conflict, our tactics and procedures are not foreign and we are able to integrate without much difficulty."

Joint exercises enable the ARG to gain experience in the region while creating friendships and working relationships with foreign countries, said Gudgin.

"By us interacting with a foreign nation's defense forces, we increase their capabilities which in turn assists them to maintain their own country's security," said Gudgin. "Port visits are also a major part of this by allowing us to enjoy and learn the local customs whilst enjoying sightseeing attractions. The local region gains from exposure to the ARG as we all spend money in the port, and this boosts the local economy."

Bonhomme Richard, commanded by Capt. Daniel Dusek, is the lead ship of the only forward-deployed ARG and is currently operating in the 7th Fleet area of operations.