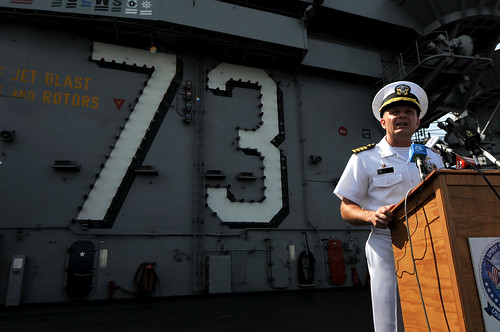 This marks the first visit to Malaysia for USS George Washington (CVN 73) since relieving the now decommissioned USS Kitty Hawk (CV 63) in 2008.

"[The U.S. Navy] always enjoys visiting Malaysia and especially Port Klang and Kuala Lumpur. Aside from an opportunity to work with regional partners, our Sailors enjoy exploring this area greatly," said Rear Adm. J.R. Haley, commander, Task Force Seven Zero. "We are fortunate to have been able to work with the Malaysian navy in multiple venues to promote stability in the region over the last several months and have more work planned after this visit."

The port visit will be kicked-off with a welcome reception aboard George Washington for more than 500 Malaysian dignitaries and distinguished visitors, and U.S. embassy and military personnel.

"We always look forward to opening our doors to our host nation," said Capt. Greg Fenton, George Washington's commanding officer. "This welcome reception provides an opportunity for our Sailors to intermix and develop relationships with Malaysian and U.S. embassy dignitaries in a relaxed atmosphere."

"When our Sailors are out there volunteering their time, they're representing our ship, the U.S. Navy, and the United States and everything it stands for," said Cmdr. Daniel Mode, George Washington's command chaplain. "These opportunities not only benefit those we're helping; volunteering to help children in need or the elderly also has a significant impact on our Sailors, and we walk away better people."

George Washington is scheduled to conduct 11 ship tours for Malaysian business and civic leaders, and military officials. The Nimitz-class aircraft carrier will also host a safety and medical exchange with the Malaysian military.

The ship's Morale, Welfare and Recreation (MWR) division has set up 10 cultural tours that will allow Sailors to take affordable excursions throughout Kuala Lumpur and the surrounding area for some well-deserved rest and to better understand the Malaysian culture.

Sailors will also have the opportunity to socialize with American families in the area through the Kuala Lumpur American Sailor Socials (KLASS), which is a program that has been developed for American families living in Kuala Lumpur to show appreciation to fellow American servicemen and women who are serving on ships and protecting all that we hold dear.

"The basic principle of the program is for American families living in Kuala Lumpur to host Sailors whenever a U.S. Navy ship is in port here," said George Washington's Command Master Chief Shaun Brahmsteadt. "Hosting can mean many different things, including home-cooked meals in a house or apartment, dinner or cocktails at a favorite restaurant, or an afternoon of sightseeing, shopping or at the movies."

The U.S. Navy works with Malaysia to conduct key military exercises to improve the capabilities of both Armed Forces, such as Cooperation Afloat Readiness and Training (CARAT), a traditionally Navy-focused exercise that is moving toward joint operations. The most recent Malaysia CARAT was conducted June 14-21, 2012.

"We are honored to be partners with the professionals of the Royal Malaysian Navy and believe that our strong relationship contributes to peace, security and stability in the region," said Fenton. "U.S. Navy ships and personnel learn a considerable amount about southeast Asia and tropical operations from our Malaysian counterparts."