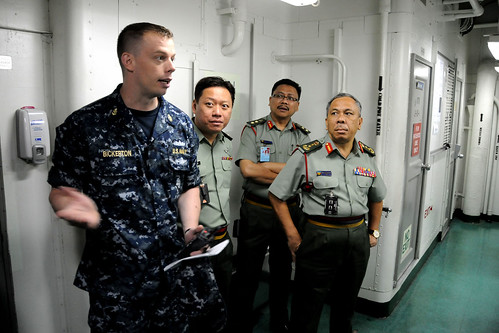 The U.S. Navy conducts professional exchanges with our partners and allies to promote interoperability and mutual understanding.

"While we work with the United States on a regular basis through the Cooperation Afloat Readiness and Training (CARAT) program, this is our first visit aboard an aircraft carrier since the USS Kitty Hawk (CV 63) was decommissioned," said Malaysian Col. Amin Muslan, from Kuala Lumpur, Malaysia. "The U.S. and Malaysia have partnered since our independence, and we hope continued exchanges such as this will build our capabilities and foster continued peace and prosperity in the region."

"These exchanges build rapport between the United States and Malaysia, as well as strengthen the trust and understanding of our militaries," said Boyd. "It also gives us a chance to demonstrate our capabilities in a humanitarian assistance or disaster recovery scenario."

Medical and dental officers in the Malaysian Armed Forces can serve in any of the three branches of service that comprise Malaysia's military, and many of them had served on Malaysian naval vessels prior to their current assignment.

"Even staples of military medicine, such as a mass casualty drill, are significantly different aboard a warship," said Muslan. "The line of evacuation is complicated by sealed compartments and ladderwells, which magnify the importance of knowing where the nearest battle dressing station is."

The officers enjoyed a comprehensive tour of the ship's medical facilities, as well as several demonstrations of George Washington's medical team's capabilities to identify and treat common shipboard injuries.

"I've seen features on the Discovery Channel about American ships, so I'm a little familiar with the technology," said Malaysian Capt. Johari Matseh. "We don't have anything like this ship and it was a very good tour."

George Washington and its embarked air wing, Carrier Air Wing (CVW) 5, provide a combat-ready force that projects and defends the collective maritime interest of the U.S. and its allies and partners in the Asia-Pacific region.