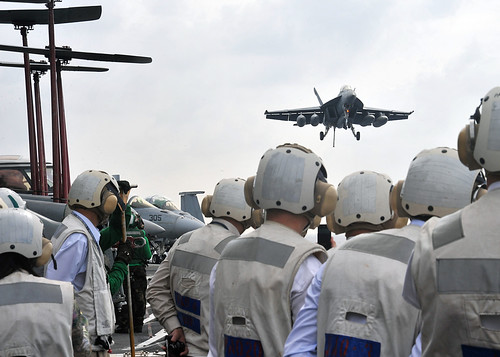 "We are partnered with all nations with the intention to work together to provide maritime security for the world," said Capt. Carlos Sardiello, George Washington's executive officer. "We are always happy to have the opportunity to host the citizens of Vietnam on our ship."

While touring the ship, the group was also escorted by four Sailors of Vietnamese descent stationed aboard George Washington.

"To actually see Vietnamese citizens come on to our ship and get to speak with them was a great opportunity that we don't get very often," said Machinist Mate 3rd Class Quan Tran, from Baltimore. "They were interested to know about our lives about the ship and exactly what it is that we do."

The visitors spoke with both high and low ranking members of the George Washington crew to better understand the ties and common goal of security and stability in the Asia-Pacific region.

Upon their departure, the visitors extended their deepest thanks to the crew of the George Washington and expressed hopes that the aircraft carrier could make a future visit to Vietnam in order to foster ties between the two countries.

"I give kudos to everyone on the ship who work together to make something so amazing and gigantic work in order to protect this region," said An T. Le, consul general for the U.S. Consulate General, Ho Chi Minh City. "The fact that 5,500 Sailors can all work so cohesively is extremely impressive."

George Washington is the flagship of the George Washington Carrier Strike Group (GWCSG), the U.S. Navy's only continuously forward-deployed carrier strike group operating out of Yokosuka, Japan. GWCSG is currently conducting a routine patrol in the U.S. 7th Fleet area of operations.