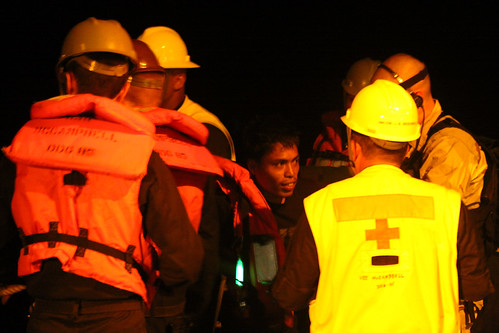 A fisherman is brought aboard USS McCampbell (DDG 85) after being rescued from his vessel which was sinking in international waters off the coast of the Philippines, Oct. 24. (U.S. Navy photo)

The men were discovered during routine night-time flight operations at approximately midnight by helicopter pilots from the HSL 51 Warlords Helicopter Squadron embarked aboard McCampbell. The men reported their fishing vessel had started taking on water early morning Oct. 23, and the entire boat was nearly sunk by the time of discovery. The pilots spotted the five men flashing a lighter while standing on the wood left from the roof of their boat.

The pilots notified the respective nearby operating ships from the George Washington Carrier Strike Group, and rescue efforts were immediately initiated. McCampbell was closest to the scene and immediately transited to the location of the stranded men and launched two boats to recover the individuals.

The men were quickly recovered and taken on board McCampbell, approximately one hour after initial discovery. The individuals were evaluated by the ship's medical personnel and found to be in good health. The individuals have identified themselves as Philippine nationals and rode McCampbell into Manila where they were turned over to Philippine Coast Guard authorities. McCampbell was already scheduled for a routine port visit to Manila.

McCampbell is part of the George Washington Carrier Strike Group, the U.S. Navy's only continuously forward-deployed carrier strike group, based out of Yokosuka, Japan, and is currently conducting a routine western Pacific patrol in support of regional security and stability of the vital Asia-Pacific region.