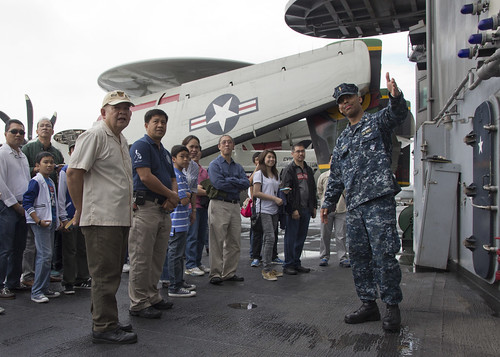 George Washington Sailors were able to enjoy some well-deserved liberty, and also had the opportunity to participate in community service (COMSERV) projects and other events to strengthen the relations between the U.S. Navy and an Asia-Pacific partner.

"The United States and the Government of the Philippines enjoy a historic relationship that builds on the strong ties between our two people," said Capt. G.J. Fenton, George Washington's commanding officer. "The United States and the Philippines work closely together on a range of issues, including humanitarian projects, responding to disasters, and combating transnational threats. Our partnership and alliance help both countries achieve mutual benefits for our people."

George Washington hosted a reception aboard the ship where more than 400 Filipino dignitaries and officials interacted with members of the crew. The ship also welcomed Ambassador Harry K. Thomas, Jr., U.S. ambassador to the Republic of the Philippines, and Secretary of the Navy the Honorable Ray Mabus.

"The Navy is America's away team and when a ship like George Washington pulls into port, that's the face of America," said Mabus. "That's how most people see Americans and it's an incredibly important thing. Sailors have to be diplomats, they have to be warriors and they have to represent the United States well. The Sailors we have aboard represent America better than anybody else. They're the best America has, and through these visits we get to show what we do day-to-day to protect freedom and the sea lanes around the world."

While anchored in Manila Bay, George Washington hosted several tours aboard the ship, showing members of the general public places like the ship's flight deck, hangar bay and navigation bridge. The ship also hosted U.S. Sen. Dick Lugar and members of Defense Threat Reduction Agency for a general orientation of the daily operations of an aircraft carrier.

"Imagine being a local in the host nation and you see this huge warship appear in your backyard; COMSERVs offset the image of the military's projected power," said Lt. Cmdr. Young Song, from Chicago, one of George Washington's chaplains and the organizer of the visit's COMSERV projects. "We do these because it allows us to not only build international relations between the people of the Philippines and us, but also to allow our Sailors the opportunity to interact with the local population on another level. We are not just a warship; we are their friends."

George Washington Sailors walk away with new memories and a better understanding of a new culture after having the chance to visit this island nation.

"I enjoyed myself during this visit," said Aviation Machinist's Mate 3rd Class Casey Van Hook, from Bradenton, Fla. "I went out and saw everything I could and tried different kinds of food."