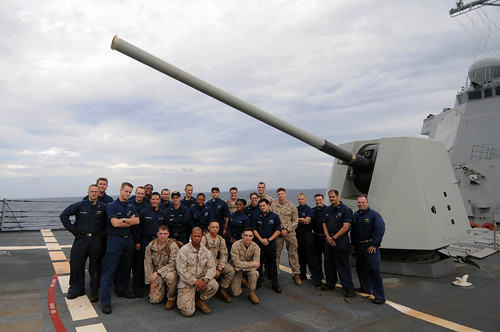 NSFS is an exercise in which destroyers and cruisers train to fire deck guns ashore in support of ground troops. Upon completion, this certification allows Mustin to support the nation's maritime strategy by coming to the aid of forces ashore under enemy fire.

Mustin embarked five U.S. Marines and two U.S. Navy Sailors assigned to 3rd Marine Expeditionary Force (MEF) at Camp Hansen in Okinawa, Japan to assist as evaluators and spotters for the period of the certification.

"Today went really well for our team, we had a couple challenges, but we were able to work through them," said Ensign Carmen Houk, Mustin's gunnery officer and gun liaison officer for NSFS. "This was a first for me and for many on the team to participate in NSFS and I believe everyone did really well being up to speed and ready to complete our tasking and remain mission ready at sea."

The live test was a scenario-based exercise in which Mustin fired Lucky Lucy at designated areas on the remote and unoccupied Japanese island of Okinodaito-Jima.

In order to hit the select areas on the island at great distances with shells, Mustin relied on the direction of airborne USN and USMC spotters onboard an SH-60B helicopter from the Warlords of Helicopter Anti-Submarine Squadron Light Five One. The spotters radioed the coordinates to Mustin, which then used a global grid system to aim its main battery gun and hit the target areas.

Mustin's guests from the 3rd MEF agreed that their time on Mustin was beneficial and that the crew received them with open arms.

"It's been great being onboard Mustin, the entire crew has been very hospitable to us," said Lt. Ryan Easton. "We did some great training with the crew during on our time onboard and they went out and had a great shoot today. It is always great to be back out at sea, this is what it is all about, green and blue working together to accomplish a mission."

Lance Cpl. Daniel Purnell said his time on Mustin was well spent and that NSFS was a great training and learning experience for him.

"This was my first time staying onboard a U.S. Navy ship for more than one day and I really enjoyed it," he added. "The crew was a lot of fun, the food was great and NSFS was something not many Marines get to see from the ship's point of view. I am glad I had this opportunity to come to Mustin."

Mustin, commanded by Cmdr. Joseph Ring, is one of seven guided missile destroyers assigned to Destroyer Squadron (DESRON 15) and is forward deployed to Yokosuka, Japan.