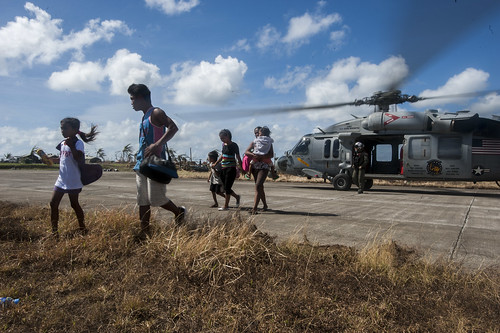 GUIUAN, Eastern Samar, Philippines - In this small village, residents lined up outside the gate of a runway awaiting food, water and medical supplies to be delivered by helicopters from the U.S. Navy's forward-deployed aircraft carrier USS George Washington (CVN 73).

Guiuan was heavily affected by Super Typhoon Haiyan, which clocked winds up to 195 miles per hour (mph) with gusts up to 235 mph. Houses that were once big and colorful, are now gray and battered. Uprooted palm trees are now makeshift shelters, and water faucets are now showers. But due to support from the George Washington Strike Group (GWSG) and 3rd Marine Expeditionary Brigade (MEB) as part of Operation Damayan, the villagers' morale and conditions are improving.

"Strong winds and waves hit our town early in the morning," said Haiyam Salisa, a Guiuan resident. "We had nothing within the matter of an hour. We were afraid and couldn't stop crying till the storm was over."

The "Golden Falcons" of Helicopter Sea Combat Squadron (HSC) 12 and the "Saberhawks" of Helicopter Maritime Strike Squadron (HSM) 77 have been the primary support to the village. The squadrons have dropped off 3,255 gallons of water, 24,900 pounds of food and 2,630 pounds of general supplies, and have conducted 221 personnel transfers.

"The Americans have brought food and water to us," said Sheen Gonzales, mayor of Guiuan. "But more importantly, they have brought us transportation to and from the island. We were isolated for many days and without the American's help, my people would not be eating their regular meals three times a day."

As boxes of supplies were off-loaded from trucks and organized into neat stacks for distribution, weary villagers ate their provided rations or discussed what their next big move may be; where they will live, who they will see and when they will rebuild.

"I was a college student studying to become an English teacher before the storm," said Maria Badango, a Guiuan resident. "I thank God my family and I survived the storm, but my dreams have been crushed for now. I must now move to Manila and find my sister so I can help my relatives."

Further away from the airfield, away from the crowds, chatter and the rumblings of jets are makeshift shelters; the villagers of which have tried to rebuild what they once had and regain a sense of normalcy.

These villagers who have not wandered to the airbase live among rubble, glass, and ruined brick and mortar. Villagers were cooking their rations of rice and meat as if nothing had ever happened. These villagers are tough; they treat each other as family and lean on one another during these hard times.

"The Filipino people are resilient, everyone is family and takes care of each other," said Personnel Specialist 2nd Class Rumero Padilla, from Manila, a relief effort volunteer from the "Dambusters" of Strike Fighter Squadron (VFA) 195.

"Our ties with the Americans go back to World War II, when this air field was used by the American military," said Gonzales. "We appreciate all the support and gratitude we have been given by the American people and George Washington."

Though these people have fallen on hard times, they are not down and out. They have taken what has been a devastating event and have started to turn it into a new chapter for their village. As U.S. Army Gen. Douglas MacArthur said on March 11, 1942 as he left Guiuan, "I came through and I shall return." The people of Guiuan shall return to rebuild and take back what was once theirs. 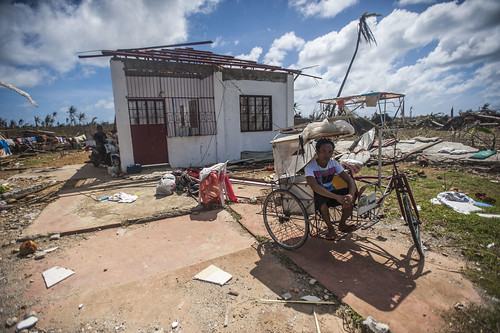 A resident of Guiuan sits in a trike outside of his ruined home in the aftermath of Super Typhoon Haiyan. (U.S. Navy photo by Mass Communication Specialist Seaman Liam Kennedy)