From a U.S. 7th Fleet Update 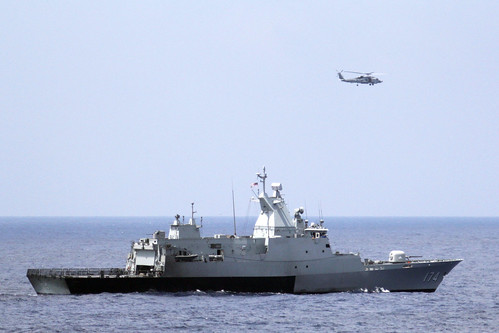 PEARL HARBOR, Hawaii - USS Kidd (DDG 100) will proceed to the Strait of Malacca to continue its assistance with the search for missing Malaysia Airlines flight MH370 and a U.S. Navy P-8A Poseidon will join the effort later this week, U.S. 7th Fleet announced March 13.

Meanwhile, in coordination with the government of Malaysia, 7th Fleet is sending USS Pinckney (DDG 91), which has been assisting with the search since the outset of the multinational effort, to Singapore for planned maintenance and routine voyage repairs. "With the search area expanding into the Strait of Malacca, Pinckney is not currently needed until follow-on information is available and planning occurs," the 7th Fleet update said.

Detailed information on Kidd's assignment in the Strait of Malacca is not immediately available.

The P-8A Poseidon will move in to the area March 15, 7th Fleet said. This move adds the P-8's enhanced technology and greater range to the search efforts while maximizing planned maintenance and guarding against air crew fatigue for both aircraft. "The P-8A is the most advanced long range anti-submarine and anti-surface warfare aircraft in the world. A true multi-mission aircraft, it also provides superior maritime intelligence, surveillance and reconnaissance," the 7th Fleet update said.

The new P-8A is part of the Navy's commitment to the Pacific rebalance, bringing newer and more capable aircraft to 7th Fleet to ensure the Navy is best postured to honor its security commitments to the Indo-Asia-Pacific and contribute to regional security and stability.