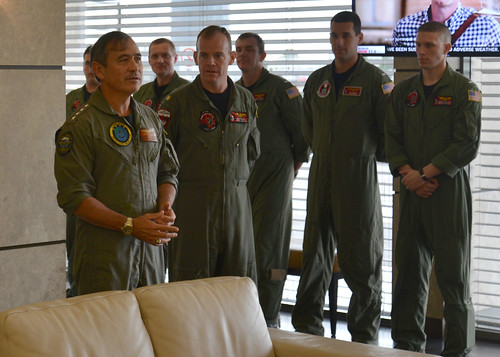 The P-8A Poseidon aircraft from Patrol Squadron (VP) 16 arrived in Kuala Lumpur, Malaysia, March 14 to assist in the search and rescue efforts for Malaysia Airlines Flight MH370. After flying several missions out of Kuala Lumpur, the crew was then relocated to Perth to focus their search on southern portions of the Indian Ocean.

During his visit, Harris commended the War Eagles on their persistence and dedication.

"You're doing a great service assisting the Malaysian and Australian governments, and the families and friends of those onboard MH370," Harris said, "as well as making those in the United States proud."

Harris, who is in Perth to attend the Indian Ocean Naval Symposium, also noted as significant the squadron's role in such a complex multilateral effort that includes the cooperation of navies, agencies and nations around the Indo-Asia-Pacific.

Since the relocation to Perth, the VP-16 War Eagles crew, known by their call sign Rescue 74, has covered an additional 55,000 square miles of search area using the full spectrum of radar, infrared, electro-optical and visual search methods.

"The crew continues to work hard, whether it's in flight or on the deck," said Lt. Cmdr. Adam Schantz, the VP-16 search and rescue detachment officer in charge. "Our maintenance and aircrew teams continue to push through to accomplish the mission they've been given."

While on station, the crew has encountered multiple radar contacts and has been able to rule the contacts out as possible debris.

"We've come across a number of radar contacts while we were on station which led us to investigate the area using visual searches. We do everything we can while we are on station to positively identify any contacts we come across," said Lt. Cmdr. Mike Trumbull, a tactical coordinator onboard the P-8A during the search and rescue missions. "Even though we haven't found aircraft debris, being able to rule out our search areas for debris is still helpful."

VP-16 is currently conducting the first operational deployment with the P-8A Poseidon in the U.S. 7th Fleet area of responsibility supporting security and stability in the Indo-Asia Pacific.

The deployment of the P-8A, the Navy's newest and most advanced maritime patrol and reconnaissance aircraft, is a tangible demonstration of the Pacific rebalance, bringing newer and more capable assets to 7th Fleet to ensure the Navy is best postured to honor its security commitments and contribute to regional security and stability.