US, Republic of Korea Forces Kick Off Exercise Ssang Yong 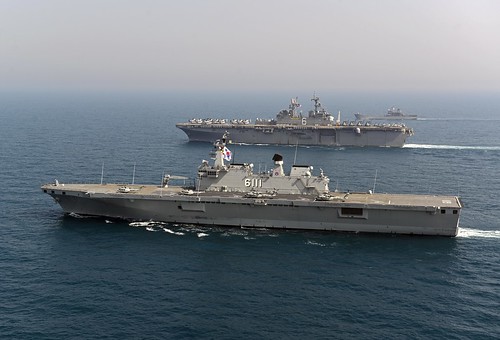 Ssang Yong, which means 'Twin Dragons', is an annual combined exercise conducted by Navy and Marine Corps forces with the ROK to strengthen interoperability and working relationships across the range of military operations from disaster relief to complex, expeditionary operations.

"Ssang Yong 2014 is a foundation for future success and demonstrates the Navy and Marine Corps team's ability to operate in a multi-ARG environment with our ROK counterparts," said Rear Adm. Hugh Wetherald, commander, Amphibious Force 7th Fleet. "Forward deployed naval forces and forward based Marine forces are working with our allies to have the ability to provide rapid deployment for a full range of military operations and contingencies in the Asia-Pacific region."

"We've been partners with the Koreans for 60 years and in this exercise we are going to practice and train together just in case we ever get called out in harm's way," said Brig. Gen. Paul J. Kennedy, commanding general, 3d Marine Expeditionary Brigade. "We are all building a narrative for generations to come."

The U.S. Navy and Marine Corps team possesses a unique ability to come together with partner nations, conduct expeditionary planning and execute amphibious operations. Exercise Ssang Yong will demonstrate the ability of a MEB headquarters to coordinate multiple Marine Air Ground Task Forces arriving in theatre via amphibious shipping, along with a ROK Regimental Landing Team, into an amphibious Combined Marine Expeditionary Brigade.