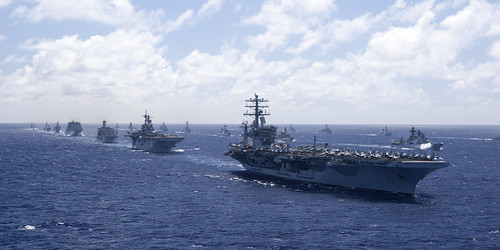 Ships participating in Rim of the Pacific (RIMPAC) exercise 2012 sail in formation in the waters around the Hawaiian islands. (U.S. Navy file photo)

SAN DIEGO – Twenty-three nations, 47 ships, six submarines, more than 200 aircraft and 25,000 personnel will participate in the biennial Rim of the Pacific (RIMPAC) exercise scheduled June 26 to Aug. 1, in and around the Hawaiian Islands.

The world’s largest international maritime exercise, RIMPAC provides a unique training opportunity that helps participants foster and sustain the cooperative relationships that are critical to ensuring the safety of sea lanes and security on the world’s oceans. RIMPAC 2014 is the 24th exercise in the series that began in 1971.

Hosted by U.S. Pacific Fleet, RIMPAC 2014 will be led by U.S. Vice Adm. Kenneth Floyd, commander of the U.S. Third Fleet (C3F), who will serve as the Combined Task Force (CTF) Commander. Royal Australian Navy Rear Adm. Simon Cullen will serve as deputy commander of the CTF, and Japan Maritime Self Defense Force Rear Adm. Yasuki Nakahata as the vice commander. Other key leaders of the multinational force will include Rear Adm. Gilles Couturier of the Royal Canadian Navy, who will command the maritime component, Air Commodore Chris Westwood of the Royal Australian Air Force, who will command the air component, and the land component will be led by Marine Corps Maj. Gen. Richard Simcock. RIMPAC 2014 will also include for the first time a special operations component, to be led by U.S. Navy Capt. William Stevens.

Two nations, Brunei and the People’s Republic of China, will participate in RIMPAC for the first time in 2014.

Also for the first time at RIMPAC this year, two hospital ships, USNS Mercy and PLA (N) Peace Ark, will participate in the exercise.

The theme of RIMPAC 2014 is “Capable, Adaptive, Partners.” The participating nations and forces will exercise a wide range of capabilities and demonstrate the inherent flexibility of maritime forces. These capabilities range from disaster relief and maritime security operations to sea control and complex warfighting. The relevant, realistic training syllabus includes amphibious operations, gunnery, missile, anti-submarine and air defense exercises as well as counter-piracy, mine clearance operations, explosive ordnance disposal and diving and salvage operations.