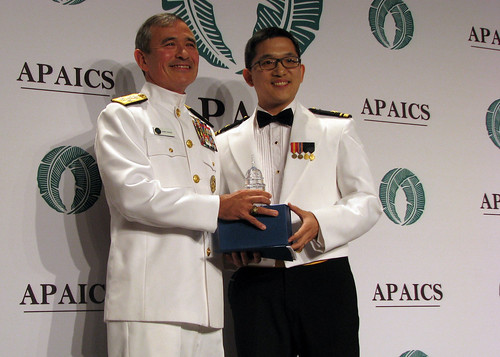 NEW YORK – The commander of the U.S. Pacific Fleet, Adm. Harry B. Harris, Jr., was honored this week for his lifetime contributions to national security in two separate events that celebrate diversity and the accomplishments from those of different cultures.

On May 6, Harris accepted the Asian American Institute for Congressional Studies (APAICS) Lifetime Achievement Award in Washington, D.C., and on May 10 he received an Ellis Island Medal of Honor Award from the National Ethnic Coalition of Organizations (NECO) in New York.

The awards embody the significant contributions that each recipient has made all while maintaining the traditions of their respective ethnic backgrounds. Harris, who is of Japanese-American descent and is the highest-ranking Asian-American officer in Navy history, accepted each on behalf of the Navy, acknowledging the many opportunities he has been afforded throughout his career.

“In World War II, Japanese-Americans were not allowed to serve in the U.S. Navy or Marine Corps, and those who did serve were in the Army,” said Harris. “Now, as the commander of the U.S. Pacific Fleet, I couldn’t be more honored to receive these awards. I know that I stand on the shoulders of the giants who paved the way for me. I'm grateful for the numerous opportunities the Navy has given me and I’m proud of the opportunities the Navy continues to give Sailors from all cultures.”

It is especially meaningful that the awards come in the month of May, where America recognizes the service and dedication of the men and women of Asian-American and Pacific Islander heritage. May honors the diversity that is central to the Navy’s identity and critical to advancing its role in maintaining peace and stability around the world.

“This is a history punctuated with stories of trailblazing heroism from Sailors that exemplify the best of who we are,” Harris explained. “This month reminds us that the true source of America’s greatness lies not in the power of our weaponry, but in the courage of those who serve.