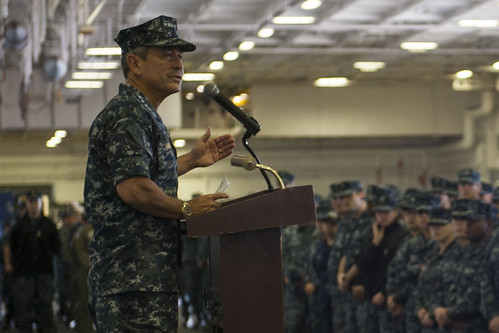 Harris spoke with Sailors during an all-hands call in the hangar bay and emphasized the important work the crew has done to prepare for future operations.

"I am glad to back aboard Nimitz," said Harris. "This is a great ship and all of you do great things. The heart and soul of our United States Navy is the carrier strike group."

Harris also emphasized that the role of the aircraft carrier is vital to the Navy's continued success and future stability.

"No matter the crisis, the question is asked; 'where is the carrier?'" said Harris. "I am grateful to be able to tell all of you that it matters to our leadership and our nation where the carriers are."

Harris spoke on the rebalance in the Pacific and whether Navy presence in the region will increase in the not-so-distant future.

Harris asked for the crew's support to help out at the deckplate level with suicide prevention, an issue that is currently impacting command climate Navy-wide.

"I want all of you to think about suicide prevention," said Harris. "Suicide is a tragedy and it matters. All of you know yourselves and your shipmates better than anyone else, so I ask that you help us all get at this tragedy before it happens."

Harris also requested support for stopping sexual assault in its tracks and cultivating a safe environment for all Sailors.

After addressing the crew, Harris took questions from the audience, covering topics ranging from naval presence in the Pacific to leadership.

Midshipman 2nd Class Shelby Ramirez, who attends Vanderbilt University and is on board Nimitz for her summer cruise, asked the admiral for tips on becoming a good leader in the fleet.

"The best advice I can give you is to say 'thank you' a lot," said Harris. "Thank the troops who serve you because they will try their best to make you look good. I believe that you can't thank them enough. You also have to wear your integrity on your sleeve. You have to have conspicuous integrity no matter what, and I think that will carry you a long way."

Harris concluded with words of inspiration for the crew, and a reassurance that our presence matters to the country and to the American people.

For Airman Casey Davis, the admiral's visit and message showed compassion and understanding from naval leadership.

"The admiral taking time to visit is very important," said Airman Casey Davis. "It means that the Navy actually cares what we have to say, and they are willing to listen."

Nimitz is currently pierside at its homeport in Naval Station Everett.