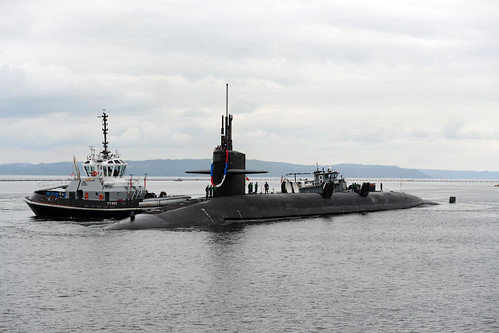 Pennsylvania Gold's patrol, which began in January, is not only the longest for an Ohio-class submarine, but the longest since beginning of the Poseidon C3 ballistic missile program in the early 1970s, according to records maintained by the Submarine Launched Ballistic Missile Weapon System Evaluation program.

"It's an honor. It was a challenge. The job kept calling for us to stay at sea, but we were ready, willing and able, so we stayed at sea and finished the mission," said Cmdr. Tiger Pittman, Pennsylvania Gold commanding officer. "I'm incredibly proud of my crew. I've been amazed by their resiliency throughout the entire time, and not only the crew, but the families. We leave and we serve, but they stay home and they serve as well."

As Pennsylvania emerged from an extended maintenance period in 2013, the patrol had originally been planned to be longer than is considered normal for an SSBN. The crew spent nearly the entire patrol underway, since unlike most other Navy vessels, SSBNs don't make routine port visits except when returning to home port.

"USS Pennsylvania Gold's patrol is an exceptional example of the flexibility and capability of the Ohio-class ballistic missile submarine. We had always expected this to be a longer than normal patrol and a highly-capable crew made it happen," said Capt. Mark VanYe, chief of staff at Commander, Submarine Group 9. "When operational commitments changed, we knew the exceptional Sailors serving on Pennsylvania and their families back home were up to the task.

"They have excelled across their entire mission set," he said. "We are glad now to have them home and congratulate them on a job well-done."

Upon their return home, Pennsylvania Gold was greeted by Commander of Submarine Force U.S. Pacific Fleet Rear Adm. Phillip Sawyer, who wanted to personally thank them and congratulate them on a job well-done.

"The SSBN strategic deterrent patrol is the most important unit mission in the Submarine Force and vital to the defense our nation," said Sawyer. "The Pennsylvania Gold Crew was on the front line of deterrence, conducting critical missions from the time the ship got underway until returning home, and I couldn't be prouder of what they have accomplished."

Pennsylvania is one of eight Ohio-class ballistic missile submarines home-ported at Naval Base Kitsap-Bangor, providing the survivable leg of the nation's strategic deterrent forces.