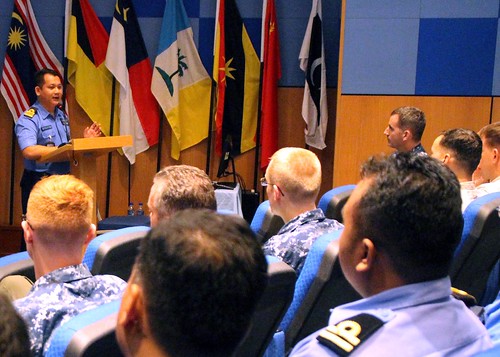 Malaysia has participated in CARAT since the nine-nation bilateral exercise series began in 1995 to address shared maritime security priorities and concerns, strengthen maritime partnerships and enhance interoperability among participating forces.

"It's really been a remarkable journey over the past two decades between our navies," said Capt. Fred Kacher, deputy commander, Destroyer Squadron (DESRON) 7. "This longstanding partnership demonstrates our mutual commitment to maritime security as the basis of stability, and ultimately, the basis for prosperity."

This year activities includes a command post exercise (CPX). Conducted every other year as part of CARAT Malaysia, the CPX will provide a practical venue for U.S. Navy, U.S. Marine Corps and Malaysian Armed Forces (MAF) participants to share best practices and refine skills as they work through the multinational scenario planning process. CPX exercise plans will be used during the Field Training Exercise (FTX) in CARAT 2015.

Continuing through June 21, the CPX coincides with port visits by the guided missile destroyer USS Pinckney (DDG 91) and the diving and salvage ship USNS Safeguard (T-ARS 50) in Lumut, as well as maritime patrol aircraft flights by a P-8A Poseidon out of Labuan in East Malaysia. Both Pinckney and the P-8A participated in Malaysian Airways Flight MH370 search operations.

On June 6, the amphibious phase of the exercise began when U.S. Marines from 1st Battalion, 8th Marines embarked on the dock landing ship USS Ashland (LSD 48), commenced a series of amphibious landings with Malaysian Army Paratroopers in Kuantan and Tanjang Resang Beach - on the east coast of the Malaysian Peninsula.

Meanwhile, on the west coast near Lumut, Seabees assigned to Navy Mobile Construction Battalion 1 (NMCB 1) built a community center out of cold-formed steel in Pasir Panjung Laut from June 6-15.

More than 1,000 Sailors and Marines are participating in CARAT Malaysia 2014. Additional units include Navy divers from Mobile Diving and Salvage Unit 1 (MDSU 1), a platoon from Explosive Ordnance and Disposal Mobile Unit 1 (EODMU 1), and the U.S. Seventh Fleet Band, Orient Express.