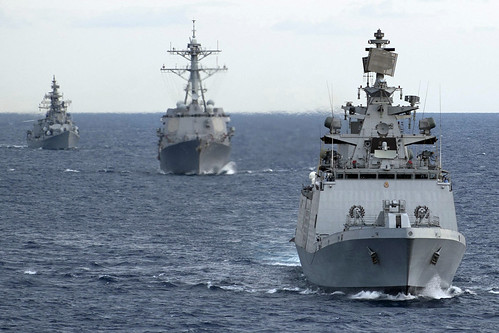 Malabar is a complex, high-end warfighting exercise that has grown in scope and complexity over the years. Malabar 2014 is the latest in a continuing series of exercises conducted to advance multinational maritime relationships and mutual security issues.

The exercise will feature both ashore and at-sea training. While ashore in Sasebo, training will include subject matter expert and professional exchanges on carrier strike group operations; maritime patrol and reconnaissance operations; anti-piracy operations; and visit, board, search and seizure (VBSS) operations.

The at-sea portions will be conducted in the waters south of Japan. They are designed to advance participating nations mil-to-mil coordination and capacity to plan and execute tactical operations in a multi-national environment.

"This [Malabar 2014] will certainly advance professional interaction and understanding between our Sailors and help us to achieve better synergy to tackle common maritime challenges," said Indian Navy Rear Adm. A. K. Jain, flag officer commanding, Eastern Fleet. "This will also help us to take naval cooperation between the U.S., Japan and India to a new level."

"Throughout the Indian and Pacific Oceans the U.S. 7th Fleet and its allies, Japan and partner India, maintain a consistent presence; it's absolutely critical that we train together and build our maritime partnership and understanding," said Capt. Shan M. Byrne, commander of Destroyer Squadron 15. "Exercises like Malabar continue to help maintain and strengthen stability and security in the Asian Pacific and Indian Ocean region."

Malabar is a yearly exercise between the Indian and U.S. navies and has been going on since 1992, featuring the Japan Maritime Self-Defense Force on three separate occasions.